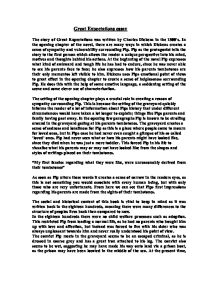 Great Expectations essay The story of Great Expectations was written by Charles Dickens in the 1800's. In the opening chapter of the novel, there are many ways in which Dickens creates a sense of sympathy and vulnerability surrounding Pip. Pip as the protagonist tells the story to the first person which allows the reader a unique perspective into his mind, motives and thoughts behind his actions. At the beginning of the novel Pip expresses what kind of awkward and tough life he has had to endure, since he was never able to see his parents face to face; he also expresses how his parents tombstones are their only mementos left visible to him. Dickens uses Pips emotional point of views to great effect in the opening chapter to create a sense of helplessness surrounding Pip. He does this with the help of some emotive language, a saddening setting of the scene and some clever use of characterisation. The setting of the opening chapter plays a crucial role in creating a reason of sympathy surrounding Pip. This is because the setting of the graveyard quickly informs the reader of a lot of information about Pips history that under different circumstances would have taken a lot longer to explain; things like Pips parents and family having past away. ...read more.

The convict also seems to be wet, suggesting he may have made his way onto land via a prison boat, as the prison may have been located in the middle of the sea. At the present time, there are no prison boats or prisons located in the middle of the sea, as we have increased access to advanced techniques and facilities, allowing us to keep convicts under control and under surveillance at all times. One of the key elements used in this novel to create sympathy for Pip has to be the choice of language used by Dickens. The opening few lines of the chapter set the tone of what is to come next surrounding Pip and the details of his life. Dickens has very cleverly inserted a couple of lines at the very beginning of the novel, in order to make an immediate impact and quickly establish a mood or idea. In this case it is the shortening and description of Pips name "My fathers family name being Pirrip, and my Christian name being Phillip, my infant tongue could make of both names nothing longer or more explicit than Pip" Dickens describe Pips name being 'Phillip Pirrip' but because Pip had an infant tongue he could not pronounce his name which ends this build up with one small word, Pip. ...read more.

"Keep still, you little devil, or I'll cut your throat" This is allegedly said by Magwitch to Pip when they meet for the very first time in the graveyard. As Magwitch grabs Pip by the throat and threatens him, Pips true side is revealed which is one of pure susceptibility. This makes Pip seem as if there is no one in the world who is truly his and would protect him from all the raw brutality in the world, this instantly creates a saddening mood within the audience regarding Pip and his loneliness. In conclusion, Charles Dickens clever use of emotive language and saddening setting of the scene in the opening chapter, has been able to successfully create a significant amount of sympathy surrounding Pip. The way Dickens used Pip as the protagonist of the story, whom told the story to the first person just added to the impact of Pips strong point of views, as readers would have felt Pip alone was explaining to you how disastrous his life had been so far. I believe the setting of the scene in the graveyard was the most vital part in creating sympathy for Pip in the opening, as it straight away lit the mood of sadness within the readers perspective, which was carried out throughout the rest of the chapter. ...read more.