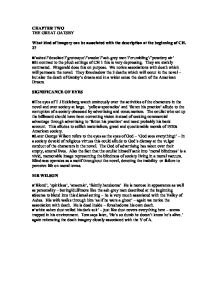 CHAPTER TWO THE GREAT GATSBY What kind of imagery can be associated with the description at the beginning of CH. 2? * 'ashes'/'desolate'/'grotesque'/'smoke'/'ash-grey men'/'crumbling'/'powdery air' * In contrast to the plush settings of CH 1 this is very depressing. They are starkly contrasted. Fitzgerald does this on purpose. We notice associations with death which will permeate the novel. They foreshadow the 3 deaths which will occur in the novel - but also the death of Gatsby's dream and in a wider sense the death of the American Dream. SIGNIFICANCE OF EYES * The eyes of T J Eckleberg watch ominously over the activities of the characters in the novel and over society at large. ...read more.

Blindness operates as a motif throughout the novel, denoting the inability or failure to perceive life on moral terms. MR WILSON * 'Blond', 'spiritless', 'anaemic', 'faintly handsome' He is morose in appearance as well as personality - boring/dull/more like the ash-grey men described at the beginning * Seems to blend into this dismal setting - he is very much associated with the Valley of Ashes. His wife walks through him 'as if he were a ghost' - again we notice the association with death. He is dead inside - foreshadows his own death. * 'white ashen dust veiled his dark suit' - just like dust covers everything here - seems trapped in his environment. ...read more.

Note Myrtle's description of her sister before Nick meets her. Myrtle herself 'changed her costume' yet again, almost as if she has adopted a new personality with the change. - 'elaborate afternoon dress' yet she claims 'I just slip it on sometimes when I don't care what I look like.' * In the same description Nick tells us: 'The intense vitality that had been so remarkable in the garage was converted into impressive hauteur. Her laughter, her gestures, her assertions became more violently affected moment by moment, and as she expanded the room grew smaller around her, until she seemed to be revolving on a noisy, creaking pivot through the smoky air.' This is a brilliant, evocative image of Myrtle - she is pretentious, vulgar, loud, flamboyant, extravagant - she feels superior in some way - she is a snob. ...read more.