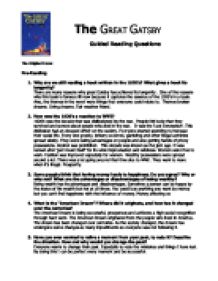 The GREAT GATSBY Guided Reading Questions The Original Cover Pre-Reading 1. Why are we still reading a book written in the 1920's? What gives a book its longevity? There are many reasons why great Gatsby has achieved its longevity. One of the reasons why this book is famous till now because it captures the essence of the 1920's in a book. Also, the themes in the novel were things that everyone could relate to. Themes broken dreams. Living dreams. Fair weather friend. 2. How was the 1920's a reaction to WWI? 1920's was the decade that was disillusioned by the war. People felt lucky that they survived and sorrow about people who died in the war. It was the 'Lost Generation'. This disillusion had an decayed effect on the society. Everyone started spending to increase their social life. Every one greedy, bribery occurred, gambling and other illegal activities spread widely. They were taking advantages on people and also getting hands of pricey possessions. Alcohol was prohibited. This decade was known as the jazz age. It was named after 'jazz music itself' for its wide improvisation and wildness. Women were free to work. Fashion was improved especially for women. Wealthy possessions were spread around a lot. There was a lot going around that time due to WWI. They want to more when it's illegal. Prosperity. 3. Some people think that having money leads to happiness. Do you agree? Why or why not? What are the advantages or disadvantages of being wealthy? Being wealth has its advantages and disadvantages. Sometime a person can be happy by the status of his wealth but not at all times. You could buy anything you want by money but you can't find happiness with the influence of money. Money affecting us 4. What is the "American Dream"? Where did it originate, and how has it changed over the centuries? ...read more.

At first Nick felt that there was a little sinister about him but after Gatsby reveals his proof he was convinced about his life. 4. What role does Meyer Wolfsheim play in the novel? Why is there so much focus on his nose and what does this tell you about Fitzgerald's politics? Meyer Wolfsheim is the man who claimed to fix the World Series in 1919. His nose was causing some displeasure to Nick as he stares at it. This also tells us that the author or Nick were judging the character. 5. What does Jordan's story of Daisy's marriage reveal about Daisy? Jordan's story of Daisy's marriage revealed some interesting things about Gatsby. Daisy and Gatsby had a relationship when Gatsby was a officer. Tom wanted to marry Daisy. Before her wedding, she received a note from Gatsby, something terrible that made her cry. The next day, she married tom willingly with no objection. 6. Why did Gatsby want Daisy to see his house? Gatsby wanted Daisy to see his house because he wanted to win her heart with his supreme wealth and power. He wanted to influence her feelings about him and bring her back to his life. 7. Nick says, "There are only the pursued, the pursuing, the busy and the tired." What does Nick mean? How does each character in the novel fit into this schema? Nick means that people all over the world are divided into these categories. People like Tom and Gatsby are pursued men because these are people who everyone is interested and followed upon. People like Nick, Gatsby and Myrtle are people who are pursing on something or someone. Whereas busy people like Jordan and Meyer are people who have a busy life. People who classify as tired are probably Daisy and Mr.Wilson because they are the people who are tired or don't bother doing anything. ...read more.

A little later a few servants and the postman from the Gatsby's station wagon joined. This signifies that people who he threw parties hardly were real friends. 4. What is the purpose of Nick's last meeting with Jordan? Nick's last meeting with Jordan was to say goodbye to his feelings for her and to herself before leaving the town. 5. Why does Nick call Tom and Daisy "careless people"? He calls them careless people because they killed people they dearly loved and smashed up things they liked and then let other people clean their mess for them. They seemed to be careless and insensitive about their actions and move on so quickly with their lives. Post Reading 1. Does this novel have villains and heroes? Why, why not? If yes, who fits into these categories and why? There were particularly no heroes and villains. They were not the perfect hero/villain as we know. Every character has a share of being a hero and a villain. 2. Nick is both part of the action and acting as an objective commentator. Does this narration style work? Why, why not? Nick narration style works because as a narrator he has to be both part of action and acting to entertain and get a feel of involvement in the story itself. 3. How did Fitzgerald use weather to reflect the mood of the story? Fitzgerald uses weather to link to the character's emotions and feelings. For example in chapter 5, the author uses rainy weather to accompany daisy's tears when she meets Gatsby. Another example is when the author uses humid weather when the fight breaks out between Tom, Daisy and Gatsby 4. Again, why are we still reading a book written in the 1920's? What gives a book its longevity? And which of its themes are eternal in the American psyche? Scott's Fitzgerald's 'The Great Gatsby' is a book still famous for its themes. The American dream was the main theme that gives this book its longevity and will stay eternal in the American psyche. ...read more.