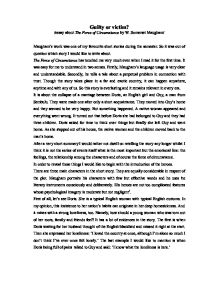 Guilty or victim? - essay about The Force of Circumstance by W. Somerset Maugham

Guilty or victim? /essay about The Force of Circumstance by W. Somerset Maugham/ Maugham's work was one of my favourite short stories during the semester. So it was out of question which story I would like to write about. The Force of Circumstance has touched me very much even when I read it for the first time. It was easy for me to understand in two senses. Firstly, Maugham's language usage is very clear and understandable. Secondly, he tells a tale about a perpetual problem in connection with trust. Though the story takes place in a far and exotic country, it can happen anywhere, anytime and with any of us. So this story is everlasting and it remains relevant in every era. It is about the collapse of a marriage between Doris, an English girl and Guy, a man from Sembulu. They were made one after only a short acquaintance. They moved into Guy's home and they seemed to be very happy. But something happened. A native woman appeared and everything went wrong. It turned out that before Doris she had belonged to Guy and they had three children. ...read more.

I guess the Malay woman carried on physiological warfare against Doris and Guy too. She did not make do with money; she wanted to get back her old life. And she paid no attention to the other woman. Her own happiness was the most important. I suppose that this behaviour is general among a certain group of women. Doris behaving patterns can be said to be also universal. Lots of women would take action in a same way if they were in Doris' shoes. I have to remark here that in spite of being a man, Maugham depicts the tangles and the incalculable risk of a woman's soul very well. The more times the native woman appeared, the more things went wrong. The initiative idyll changed to a hell little by little. At first only small signs referred to the problem. For instance, the man's smile changed. It became insincere. Sometimes Guy gave by-pass answers or simply did not give answer. Of course, no answer is an answer too. And if you pay enough attention to it, you can draw thorough conclusions. Finally Guy became tense, frustrated and anxious. ...read more.

It can be considered also as a circumstance which he had to face with and which overcame Guy and Doris, too. And yes. Doris also complied with the force of circumstance; when she moved to Sembulu with Guy because of her deep love; when she became cold and were making conversation with a stranger because this behaviour could ease her situation and lower her pain; and when she finally decided to go away because even the thought of Guy and the native woman's common life was unbearable. Besides the circumstance there are two imperative forces, two basic oppositions between them. On the one hand, they differ from each other because they were woman and man. From time immemorial there are differences between the two sexes. For example, men as Guy too can forget the past but women can not get over it. Men can decolonise the sensual pleasures from the real feelings, women can not. In some case men can cut themselves adrift from the fact that they have children. For a woman it is very difficult and it can be frightful. Although because of these differences sometimes women and men can understand each other with difficulty, they are superable. But there are also cultural differences between Doris and Guy which deepen the problem insolvably. ...read more.