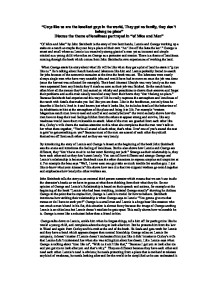 &quot;Guys like us are the loneliest guys in the world, They got no family, they don't belong no place&quot;. Discuss the theme of loneliness portrayed in &quot;of Mice and Men&quot;

"Guys like us are the loneliest guys in the world, They got no family, they don't belong no place" Discuss the theme of loneliness portrayed in "of Mice and Men" "Of Mice and Men" by John Steinbeck is the story of two farm hands, Lennie and George working up a stake on a ranch so maybe they can buy a place of their own "An' live off the fatta the lan'." George is smart and small where as Lennie is a massively strong giant of a man yet as innocent and simple minded as a young child who relies on George as a protector and mentor. There is a theme of loneliness running through the book which comes from John Steinbecks own experiences of working the land. When George starts his story about what life will be like when they get a plot of land he starts it "guys like us." He's talking about Ranch hands and labourers like him and Lennie probably forced to search for jobs because of the economic recession at the time the book was set. The labourers were nearly always single men who have very unstable jobs and would have had to move on once the job was done (once the harvest was collected for example). Their hard itinerant lifestyle was very lonely as the men were separated from any friends they'd made as soon as their job was finished. ...read more.

The fact that George puts up with this "crazy son of a bitch" who loses both of them their jobs and "does bad things" which keeps him running around the country shows that even though he is wistful about what his life might be like, he needs Lennie. I think George loves him, not as an equal but as he would love an animal or maybe even a child and Lennie loves George completely, he is tirelessly devoted to him. The uniqueness of their friendship captures and interests the reader and makes the loneliness seem worse at the end of the book without Lennie. Most of the people that live and work on the ranch have been crippled by the harsh lonely environment that they live in. I think that Steinbeck uses physical crippling to symbolise how the people have big emotional problems most of them to do with loneliness. Candy whose physical crippling is that he has no hand is terrified of what will happen to him when they "can" him because he's too old and useless, he's got no one now that his dog was shot because it "ain't no good to anyone." Physically Crooks' back is twisted after a kick from a horse and he's bitter and angry at his lonely, helpless status as a black outcast. ...read more.

George tells him their dream even though he knows it's over "Guys like us are the loneliest guys in the world....." and then he shoots him "right back of head" George now has no one and is left to lead the life he was trying to escape from with no hope of anything better. Working on the plains in the 1930s was a very lonely place be and through "Of Mice and Men" Steinbeck pours into the reader the atmosphere and life of the place showing them how it was. Loneliness is a basic human emotion which I think everyone feels at some point in their lives and so people now as well as when Steinbeck first published the book in the 1930s can relate to the characters. I think the book is a tragedy because Lennie was kind of doomed from the start by his huge strength and weak mind to do "bad things." The book has a structure of patterns and parallels that suggest that events are going to happen before they do, building the tension and keeping the reader gripped. When George kills Lennie the happiness and the hope in the book breaks down but before that, for a little while George, Lennie and Candy can really believe that they might do it, and live their dream. Lennie dies happy because he believes they are going to get the place with the rabbits right then. So even though they never accomplished their dreams they were worth having. ...read more.