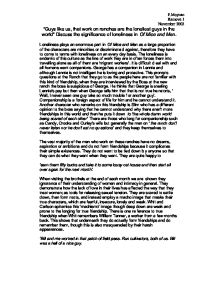 &quot;Guys like us, that work on ranches are the loneliest guys in the world&quot; Discuss the significance of loneliness in Of Mice and Men.

"Guys like us, that work on ranches are the loneliest guys in the world" Discuss the significance of loneliness in Of Mice and Men. Loneliness plays an enormous part in Of Mice and Men as a large proportion of the characters are minorities or discriminated against, therefore they have to come to terms with loneliness on an every day basis. The loneliness is endemic of this culture as the line of work they are in often forces them into travelling alone as all of them are 'migrant workers'. It is difficult deal with and all humans want companions. George has a companion in Lennie and although Lennie is not intelligent he is loving and protective. This prompts questions at the Ranch that they go to as the people here are not familiar with this kind of friendship, when they are interviewed by the Boss at the new ranch the boss is suspicious of George. He thinks that George is stealing Lennie's pay but then when George tells him that that is not true he retorts, ' Well, I never seen one guy take so much trouble for another guy'. Companionship is a foreign aspect of life for him and he cannot understand it. ...read more.

Candy is also very much a victim of the 'sickness' of loneliness because he is a cripple and anyone with a difference is considered not worth the effort. Like Crooks he has to combat this loneliness in some way and he does this through his dog. The dog's personifies Candy and is a metaphor for Candy's life: old, ignored, good for nothing and eventually disposed of, as Candy will unquestionably be. He is, in fact, very friendly though no one will accept him because he is different. This is a recurring point throughout the novel about the exclusion of those who are different: Crooks is a Negro, Candy is disabled, Lennie is unintelligent and Curley's wife is a woman (which was considered to be inferior in those days). These people are all lonely because they are superficially inferior to their 'typical' counterparts. All these people combat their loneliness by employing different tactics: Candy forms a tight bond with his dog, Crooks reads books, Curley's wife presents herself as a flirtatious 'floozy' and the vast majority of migrant workers visit a prostitute once a month. The dog, which symbolizes Candy, is mercifully killed in a supposed act of kindness. This signifies the insensitive attitude of many of the workers to Candy's feelings and his attachment to the dog. ...read more.

Then there is the idea that as he is kind and friendly to all he feels that the fulfilment he gains from this respect and the way that nobody dislikes him is enough to grant him a feeling of friendship although it is not indisputable friendship, I find this the most credible of the three as the friendliness that he offers everyone acts like a passive, though adequate, friendship. The idea of loneliness is an ongoing topic throughout the book that effects nearly all of the characters, though to lesser and greater degrees. Steinbeck uses the book to show how humans are affected by loneliness and the way that humans are weak without friendship as they are strong with it. We are shown in detail how humans change through prolonged periods of solitude into shadows of their former selves. Loneliness is an incurable disease for those who are apparently inferior though those who are not cannot and never will be able to understand the significance of this state of being. 1. A letter by from Steinbeck written to an actress who was playing the part of Curley's wife in a Broadway production in 1938, and who wondered about her character. F.Moynan Remove 1 November 2002 ...read more.