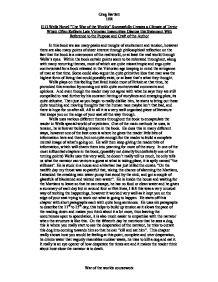 H.G.Wells Novel &quot;The War of the Worlds&quot; Successfully Creates a Climate of Terror Which Often Reflects Late Victorian Insecurities Discuss this Statement With Reference to the Purpose and Craft of the Author.

H.G.Wells Novel "The War of the Worlds" Successfully Creates a Climate of Terror Which Often Reflects Late Victorian Insecurities Discuss this Statement With Reference to the Purpose and Craft of the Author In this book we see many peaks and troughs of excitement and tension, however there are also many points of sheer interest through philosophical reflection on the fact that the book is a microcosm of the real world, or at least the real world through Wells's eyes. Within the book certain points seem to be reiterated throughout, along with many recurring themes, most of which are quite misanthropic and ergo quite controversial for a book released in the Victorian age keeping in mind the arrogance of man at that time. Some could also argue the quite primitive idea that man was the highest form of living that could possibly exist, or at least that's what they thought. Wells plays on this feeling that lived inside most of Britain at that time, he provoked this emotion by coming out with quite controversial comments and opinions. And even though the reader may not agree with what he says they are still compelled to read further by his constant hinting of storylines and emerging plots, its quite delusive. ...read more.

It really is an eye opener of how desperate the times are and it makes the reader think about how close the narrator is to death. The tensest point in the book is where the narrator is hiding in the river from the Martians and has to escape. The narrator writes the detail of his escape from them. The atmosphere is full of tension and fear we know this as the fear brings the sense of the narrators physical pain agony, "painfully" and "rapidly getting hotter" makes us see the narrators pain. The tension in the atmosphere comes from the uncertainty of the Martians. "I saw them dimly" this suggests that the Martians are hidden and out of sight, this leads to confusion and disbelief in the reader as they aren't sure what is going on and are forced to read on to find out. The atmosphere of fear and tension gives way to a feeling of relief, "And then, very slowly, I realised that by a miracle I had escaped" this shows the tension has been relieved and a sense of relief is shown due to the narrator surviving the Martians. ...read more.

like, but bad because it will make them worry about if Martians did land they would kill a lot of people and create atmospheres of tension and anxiety. I don't believe the story of the War of the Worlds has the power to create such a fear to people as it may have in the nineteenth century as people in theses days know about space travel. We have had people go into space to see if they could find something in space living, but nothing yet has been found however in the nineteenth century the people then did not know about space travel and did not know a lot of facts about space only fictional tales. I believe that H.G.Wells is a literary genius of his time, if such a piece were to be written now; it would probably be heckled as one of the most farcical pieces of literary to bless the world with its presence. However due to the time at which it was written and the events taking place at the time, world war looming and the arms race turning into a sprint finish, this piece went from being just another science fiction to one that may have changed the world...forever. Greg Bartlett 10R War of the worlds coursework ...read more.