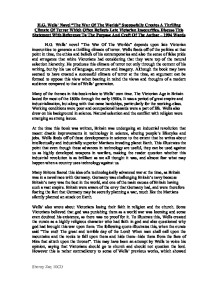 H.G. Wells' Novel &quot;The War Of The Worlds&quot; Successfully Creates A Thrilling Climate Of Terror Which Often Reflects Late Victorian Insecurities. Discuss This Statement With Reference To The Purpose And Craft Of The Author - 1994 Words

H.G. Wells' Novel "The War Of The Worlds" Successfully Creates A Thrilling Climate Of Terror Which Often Reflects Late Victorian Insecurities. Discuss This Statement With Reference To The Purpose And Craft Of The Author - 1994 Words H.G. Wells' novel "The War Of The Worlds" depends upon late Victorian insecurities to generate a thrilling climate of terror. Wells feeds off of the politics at that point in time, the ethics and beliefs of his contemporaries and also the sense of false pride and arrogance that white Victorians had considering that they were top of the natural selection hierarchy. He produces this climate of terror not only through the content of his writing, but by his use of language, structure and imagery. Although the book may have seemed to have created a successful climate of terror at the time, an argument can be formed to oppose this view when bearing in mind the views and thoughts of a modern audience compared to that of Wells' generation. Many of the themes in this book relate to Wells' own time. The Victorian Age in Britain lasted for most of the 1800s through the early 1900s. It was a period of great empire and industrialization, but along with that came hardships, particularly for the working-class. ...read more.

He is trapped in a house and the curate has just been killed. "On the twelfth day my throat was so painful that, taking the chance of alarming the Martians, I attacked the creaking rain-water pump that stood by the sink, and got a couple of glassfuls of blackened and tainted rain-water". He is inside the house and waiting for the Martians to leave so that he can escape, he has no necessities such as food or water and he gives a brief summary of each day in around three or four lines, rather like a diary of some sort, which was a very peculiar way of reciting the goings on, however it worked very well as it kept you on the edge of your seat and gave you a sense of curiosity and anticipation as to what will happen next. This adds to the tension and the climate of terror for the reader. He starts off this chapter with short paragraphs each containing quite long sentences. He uses six paragraphs to describe the 11th to 15th day, this helps to build up tension as it slows the pace of the reading down and makes you think about it a lot more, which suspends the story a lot, knowing that this will create a sense of curiosity and anticipation in the reader. ...read more.

however in the nineteenth century the people then did not know about space travel and did not know a lot of facts about space only fictional tales. In this day and age, many of us have viewed horror films and have been frightened by the visual effects and sounds. This increases our tolerance for being frightened, and therefore when you then read a book you feel that it is nowhere near as frightening as a horror film, mainly because you have no visual or audible aid in literature as you do in film. In conclusion, Wells does successfully create a climate of terror for an audience of his generation and we must appreciate his influence on science fiction literature and film in modern times. He not only wrote an encapsulating novel, but also incorporated relevant political and social issues of his contemporaries into his book. To relate to how Victorians would have felt about this novel and its effect on society, we could relate to a modern day equivalent of Martian invasion. A good example of this is how modern day citizens currently feel about terrorism. We all fear a large-scale war; we all fear terrorist attacks, just as Victorians feared the world war and the narrator feared the Martians and the end of the human race, as we know it today. ?? ?? ?? ?? Sheroy Zaq 10CO ...read more.