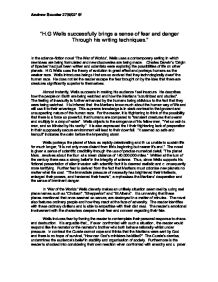 &quot;H.G Wells successfully brings a sense of fear and danger through his writing techniques.&quot;

"H.G Wells successfully brings a sense of fear and danger Through his writing techniques." In the science-fiction novel 'The War of Worlds', Wells uses a contemporary setting in which new ideas are being formulated and new discoveries are being made. Charles Darwin's 'Origin of Species' had just been written and scientists were exploring the possibilities of life on other planets. H.G Wells uses the theory of evolution to great effect and portrays humans as the weaker race. Wells introduces beings that are so evolved that they technologically dwarf the human race. He does not let the reader escape the fear brought on by the idea that there are creatures significantly superior to themselves. Almost instantly, Wells succeeds in making his audience feel insecure. He describes how the people on Earth are being watched and how the Martians "scrutinized and studied". The feeling of insecurity is further enhanced by the humans being oblivious to the fact that they were being watched. It is inferred that the Martians know much about the human way of life and will use it to their advantage. This supreme knowledge is in stark contrast to the ignorant and unsuspecting nature of the human race. For the reader, it is frightening to think of the possibility that there is a force so powerful, that humans are compared to "transient creatures that swarm and multiply in a drop of water". ...read more.

The Curate's demise, undermines the audience's belief in stability and organisation of society. Furthermore is the reader is shocked into considering their own reaction when confronted with anarchy and uproar. Using these two contrasting characters, Wells cleverly puts the reader in the uncomfortable position of asking how they would react. The reader is forced to consider the extreme lengths that people will go to ensure their survival, "three people at least...were crushed and trampled there and left to die." Wells further induces horror by portraying the hideous ways by which the Martians feed. He describes it in such a way that is not only awful but realistic also, "and then began a shrieking and a sustained and cheerful hooting from the Martians". The narrator and the Curate see this taking place from the ruined house and Wells takes full advantage of this to increase the tension of the reader, brought on by the potential danger of their close proximity to the Martians. The tension is increased by the man and the young boy being killed and eaten to satisfy the hunger of the extra terrestrial beasts. The suspense in the ruined house however, comes to a climax when the Martians hear the Curate's cries,"' I have been still too long' in tone that must have reached the pit." Wells portrays the narrator's fear to great affect as the Martian probed the inside of the house, "its gripping limbs curled inside the debris." ...read more.

Wells uses similes to great effect in this novel. When the first cylinder lands it is described as a "poisoned dart". This warns the reader of impending doom and that the Martians will take over and plague the planet. Wells also makes the reader more apprehensive of the Martians by making them seem mystical and even more extra-terrestrial, "causing a flash of light like summer lightening." To emphasise that the humans were being watched, and to make his audience uncomfortable, Wells uses alliteration. "Scrutinised and studied" reinforces the idea that the Martians are superior and makes them seem more powerful. To highlight the inevitable onslaught, Wells highlights the differences between the two species and describes the hideous physical attributes of the Martians, "The lipless brim of which quivered and panted, dropping saliva. The body heaved and pulsated convulsively". H.G Wells has succeeded in bringing fear and danger into the novel by making the reader aware of the emotions endured by the characters. The audience can relate to the novel as it uses a contemporary setting and the problems encountered can be applicable to the real world. Moreover, Wells uses the main theme of survival of the fittest and does not let his readers escape the possibility that they not the dominant species. He forces them to think of the consequences of being an inferior race, which for humans is an uncomfortable and unnerving thought. Andrew Scuoler 27/9/02' 5f ...read more.