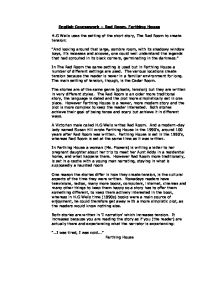 H.G Wells uses the setting of the short story 'The Red Room' to create tension.

English Coursework - Red Room, Farthing House H.G Wells uses the setting of the short story, The Red Room to create tension: "And looking around that large, sombre room, with its shadowy window bays, it's recesses and alcoves, one could well understand the legends that had sprouted in its black corners, germinating in the darkness." In The Red Room the same setting is used but in Farthing House a number of different settings are used. The various locations create tension because the reader is never in a familiar environment for long. The main setting of tension, though, is the Cedar Room. The stories are of the same genre (ghosts, tension) but they are written in very different styles. The Red Room is an older more traditional story, the language is dated and the plot more simplistically set in one place. However Farthing House is a newer, more modern story and the plot is more complex to keep the reader interested. Both stories achieve their goal of being tense and scary but achieve it in different ways. A Victorian male called H.G Wells writes Red Room. And a modern-day lady named Susan Hill wrote Farthing House in the 1990's, around 100 years after Red Room was written. Farthing House is set in the 1950's, whereas Red Room is set at the same time as it was written. ...read more.

"...eight-and-twenty years you have lived and never seen the likes of this house..." In Farthing House the characters do not provide much tension, only the events of the story. Everyone seems more normal because a residential home is more of a normal setting with more every-day characters instead of eerie old, deformed custodians in a spooky castle. The only tension any characters create is mental - through what they say, like the vicar: "I see you have been looking at the poor little Farthing House graves" Farthing House But it is physical appearances as well as what the characters say that adds tension: "...said the man with the withered arm..." Red Room The characters also have an eerie and mysterious manner: "This nights of all nights! Said the woman." The characters create tension as never know fully what they are talking about. We don't even know their or the narrator's name. There are very big differences in the setting of both stories. Red Room is set in an old castle with a 'haunted' room, this instantly implies there will be tension from that, whereas Farthing House is set in a residential Home near a small village, this creates tension because we don't quite know what to expect and where the tension is going to come from and where. ...read more.

This is a major source of tension, for as we are getting into his skin and experiencing what he does, we don't want him/ourselves to come to any harm. Red Room is tenser then Farthing House. The stereotypical features of the story increase tension. I feel more tension is generated throughout the story. In between the jolts of tension throughout Farthing House, the mundane, slow writing gets a little tedious and takes the tense edge away from the story. The main source of tension in Farthing House is the fact we do not know where the tension will come from next. The main sources of tension in Red Room are the setting, a dark, castle with a 'haunted' room, and the characters, with their odd deformities and mysterious mannerisms. As Red Room was shorter the tension was much more compressed and the story did not drag on, whereas in Farthing House there was a lot of boring descriptive writing, which had little relevance to tension. To sum up the stories I would say that The Red Room has the most tension and the whole story is devoted to increasing the tension. Farthing House is less tense as it spends a lot of time waffling about every-day, boring things, which aren't very interesting to read about. Therefore Red Room is tenser then Farthing House. Leo Matlock ...read more.