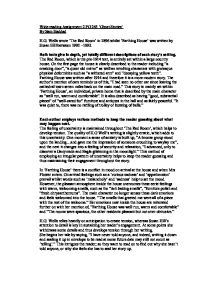 H.G. Wells wrote 'The Red Room' in 1896 whilst 'Farthing House' was written by Susan Hill between 1992 -1993 - Both texts give in depth, yet totally different descriptions of each story's setting.

Wide reading Assignment 2 PG 245 'Ghost Stories' By Sam Haddad H.G. Wells wrote 'The Red Room' in 1896 whilst 'Farthing House' was written by Susan Hill between 1992 -1993. Both texts give in depth, yet totally different descriptions of each story's setting. The Red Room, which is the pre-1914 text, is entirely set within a large country house. On the first page the house is clearly described to the reader including "a creaking door", "a queer old mirror" as well as revolting characters with grotesque physical deformities such as "a withered arm" and "decaying yellow teeth". Farthing House was written after 1914 and therefore it is a more modern story. The author's mention of cars reminds us of this, "I had seen no other car since leaving the cathedral town seven miles back on the main road." This story is mainly set within 'Farthing House', an individual, private home that is described by the main character as "well run, warm and comfortable". It is also described as having "good, substantial pieces" of "well-cared for" furniture and antiques in the hall and as fairly peaceful. ...read more.

She begins her tale by saying, "I have never told anyone, and indeed, writing it down and sealing it up in envelope to be read at some future date may still not count as 'telling'." This intrigues the reader; so they want to read on to find out why she hasn't told anyone, or why she feels she has to seal her story up. The extent of detail in both stories is very different. In the Red Room we are told very little about the main character apart from things such as he has an 'open-mind', is 28 years old, and it would take 'a lot to frighten' him. We can deduce that he may be a sceptic and we are witness to the emotional changes he feels due to his fear. The narrator says, " 'I can assure you,' said I, 'that it would take a very tangible ghost to frighten me' ", which shows the arrogance of his character. In 'The Red Room' detail is focused mainly on the setting of the story and not on the main character. "The long, draughty, subterranean passage was chilly and dusty, and my candle flared and made the shadows cower and quiver." ...read more.

'The Red Room continues its irregularity of tension up to the end with an anti-climax where tension is gradually built up and then dramatically let down. "It is not...there is no ghost there at all; but worse, far worse-" and then "The worst of all things that haunt poor mortal man...and that is, in all its nakedness-Fear!" He admits that there is no ghost in the room but it is he own fear of the unknown that is causing him to work himself up into frenzy. Because of this 'The Red Room' looses its disturbing atmosphere eeriness and the ending is spoiled. It would have been better if tension was sustained and then emphasised to make the ending more prominent and sinister. It is spoilt. It was spoiled. It was spoilt. It is spoiled. Contrastingly, the disturbing atmosphere in Farthing House is maintained right to the very end as the author continues her vivid, eerie descriptions of the characters, in particularly the ghost of the young woman. "I think of it constantly, see the young, pale distraught woman, her arms outstretched." I feel by maintaining the sense of tension the ending is more effective and successful. ...read more.