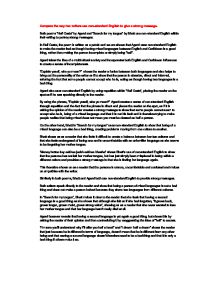 Half Caste by Agard and Search for my tongue by Bhatt use non-standard English within their writing to portray strong messages.

Compare the way two writers use non-standard English to give a strong message. Both poems "Half Caste" by Agard and "Search for my tongue" by Bhatt use non-standard English within their writing to portray strong messages. In Half Caste, the poem is written as a patois and we are shown that Agard uses non-standard English to make the reader feel as though having mixed languages between English and Caribbean is a good thing, rather than making the person incomplete or simply being "half". Agard takes the idea of a multicultural society and incorporates both English and Caribbean influences to create a sense of incompleteness. "Explain yuself, wha yu mean?" shows the reader a fusion between both languages and also helps to bring out the personality of the writer as if ...read more.

On the other hand, Bhatt in "Search for my tongue" uses non-standard English to show that being of a mixed language can also be a bad thing, creating problems moving from one culture to another. Bhatt shows us as a reader that she finds it difficult to create a balance between her two cultures and that she feels endangered of losing one and is uncomfortable with an unfamiliar language as she seems to be forgetting her mother tongue. "Munay huttoo kay aakhee jeebh aakhee bhasha" shows Bhatt's use of non-standard English to show that the persona has not left her mother tongue, but has just simply been misplaced in being within a different culture and provides a strong message in that she is finding her language again. ...read more.

grows moist, grows strong veins", showing us as a reader that she never wanted to lose her mother tongue and that her language hasn't really died at all. Agard however reveals that having a second language is yet again a good thing, but shows this by asking the reader of their opinion and then contradicting it by exaggerating the idea of "half" to excess. "I'm sure you'll understand why I'll offer you half a hand" and "I dream half a dream" shows the reader that just because he is different in terms of language, doesn't mean that he is different from any other being and that owning a second language doesn't therefore need to be a bad thing and that it is only a bad thing if others make it so. ...read more.

The Response to the Question here is average, and indicative of a candidate working towards a low/middle C grade. The reason they haven’t scored higher is because a lot of the analysis is disjointed and basic, meaning that the comparative ...

The Response to the Question here is average, and indicative of a candidate working towards a low/middle C grade. The reason they haven’t scored higher is because a lot of the analysis is disjointed and basic, meaning that the comparative points are not greatly explicit. The mark scheme directs “confident and explicit” analytical ideas, which are not evident here. There is also a misconstruction of analysis/understanding of the poetic devices Agard and Bhatt use in their respective poems. The candidate writes: ““Explain yuself, wha yu mean?” Agard creates a sense of non-standard English”; it’s not the best wording here, to create a “sense” of non-standard English, as non-standard English is something that is either there or it isn’t, and said sense is not created through repetition or direct accusations. The candidate should be sure to make their analysis is accurate and succinct and that they are not simply throwing ideas as the premise of the question.

The Level of Analysis is evident, but quite shallow; there is not much depth here. A lot of the analysis is disjointed and though a good effort is made there is not a cohesive structure evident. The candidate opts to study both poems separately and so the comparison points are limited. I would advise against this because by considering the poems separately the candidate comments about language, imagery, effect on audience, etc. of one poem and then the other. This limits the extent to which the candidate can satisfy the question because there is no explicit comparison. The candidate should therefore aim to look for two or three common themes within both poem and two or three differences (pertaining to the question) and dedicate a paragraph to each one (e.g. phonetics, dialect, second person address), comparing the presence and effect each poetic device has on its respective poems.

The Quality of Written Communication is slightly below average. The candidate’s grammar is not absolutely perfect and often leads the essay to flow awkwardly. To counter this, candidates must remember to be accurate and to spell-check and proof-read the essays they write, to ensure clarity of their written expression, because without these checks candidates can lose easy marks.