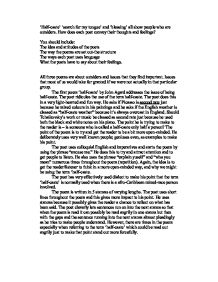 'Half-caste' 'search for my tongue' and 'blessing' all show people who are outsiders - How does each poet convey their thoughts and feelings?

'Half-caste' 'search for my tongue' and 'blessing' all show people who are outsiders. How does each poet convey their thoughts and feelings? You should include: The idea and attitudes of the poets The way the poems are set out-the structure The ways each poet uses language What the poets have to say about their feelings. All three poems are about outsiders and issues that they find important. Issues that most of us would take for granted if we were not actually in that particular group. The first poem 'half-caste' by John Agard addresses the issue of being half-caste. The poet ridicules the use of the term half-caste. The poet does this in a very light-hearted and fun way. He asks if Picasso is second rate just because he mixed colours in his paintings and he asks if the English weather is classed as "half-caste weather" because it's always overcast in England. Should Tchaikovsky's work or music be classed as second rate just because he used both the black and white notes on his piano. ...read more.

The second poem 'search for my tongue' by Sujata Bhatt, tries to deal with the difficulty immigrants might have speaking two languages. This poem uses both English and Gujarati to make this point. The poet wonders whether she will forget her mother tongue but by the end of the poem is quite sure that she wont. The poem is written in three sections. In the first section the poet expresses her worries about losing her mother tongue. In the second section she explains these ideas in Gujarati whilst in the third section she dreams that although she may feel that she is losing her mother tongue, it was in fact growing stronger within her. By using the phrase 'I have lost my tongue' the poet is cleverly telling us how confused she is and does not know what to say. While dreaming, the poet uses metaphors to describe her tongue. She compares it with a plant when she says "it grows back, a stump of a shoot grows longer." ...read more.

The poem refers to men, women and children in stanza three, but only to the children in stanza four. This is because most people are sympathetic towards children and can give more emotion to the poem. The poem also stresses the different way the adults and the children behave at the sight of water. Whilst the adults are busy collecting water, the children play around the water gleefully. The children are obviously unaware of how serious the situation was without water. The poem can probably be read in a pitiful tone, sympathising with the poor and cheerfully when the pipe bursts and there is water about. All three poems deal with issues important to the minority of this country. Each poet is able to convey their thoughts and feelings very effectively and each one is able to do so using their own methods of writing. Each poem uses various imagery and language to get the point across. Each poem has been effective in getting across their points across and making readers think of how a problem that they perceive as being simple, is actually very important to the people concerned. Jay Sedani ...read more.