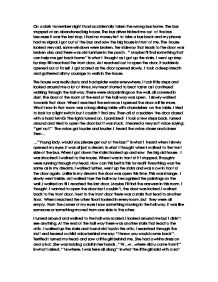 On a dark November night I had accidentally taken the wrong bus home. The bus stopped at an abandoned big house. The bus driver kicked me out of the bus because it was the last stop. I had no money left to take a bus back and my phone had no signal. I got out of the bus and saw the big house in front of me. The house looked very old, some windows were broken, the stairway that leads to the door was broken also and there was old furniture in the porch. '' Maybe I'll find something that can help me get back home'' is what I thought as I got up the stairs. I went up step by step till I reached the front door. As I reached out to open the door, it suddenly opened out of its self. ...read more.

Then all of a sudden the door closed with a hard BANG! The lights turned on. I panicked! I took a few steps back, turned around and tried to open the door but it was stuck. I heared a very soft voice saying: ''get out!'' The voice got louder and louder. I heard the voice closer and closer then... ...''Young lady, would you please get out of the bus!'' is what I heard when I slowly opened my eyes. It was all just a dream, is what I thought when I walked to the front side of the bus. When I got down the stairs I looked up and saw the big old house. I was shocked! I walked to the house. When I was in front of it I stopped. ...read more.

It was like someone or something moved from one side to the other. I turned around and walked to the hall way scared. I looked around me but I didn't see anything. At the end of the hall way there was another stairs that lead to the attic. I walked up the stairs and found old toys in the attic. I searched through the stuff and heared a child voice behind me say: ''I knew you would come back''. Terrified I turned my head and saw a little girl behind me. She had a white dress on and a hat. She was holding a doll in her hands . ''W...w...where did u come from?'' is what I asked. ''Nowhere, I was here all along'' is what the little girl said with a soft voice. She sat down on the floor and played with her doll. ''come back? What do you mean? I was here before?'' I asked with a low voice. ...read more.

This is an imaginative and well-told story. The first-person narrative effectively involves the reader and we are intrigued by the repetition of the dream events after the narrator wakes.