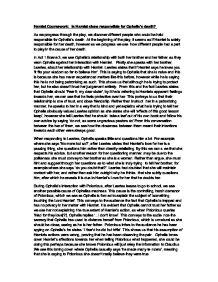 Hamlet Coursework: Is Hamlet alone responsible for Ophelia's death? As we progress through the play, we discover different people who could be held responsible for Ophelia's death. At the beginning of the play, it seems as if Hamlet is solely responsible for her death, however as we progress we see how different people had a part to play in the cause of her death. In Act 1 Scene 3, we see Ophelia's relationship with both her brother and her father, as they warn Ophelia against her interaction with Hamlet. Firstly she speaks with her brother, Laertes, about her relationship with Hamlet. Laertes states that if Hamlet says he loves you 'it fits your wisdom so far to believe him'. This is saying to Ophelia that she is naive and this is because she has never experienced matters like this before, however while he is saying this he is not being patronising as such. This shows us that although he is trying to protect her, but he also doesn't trust her judgement entirely. From this and the fact Laertes states that Ophelia should 'Fear it, my dear sister', by it he is referring to Hamlets apparent feelings towards her, we can see that he feels protective over her. This portrays to us that their relationship is one of trust, and close friendship. Rather than instruct her in a patronizing manner, he speaks to her in a way that is kind and yet explains what he is trying to tell her. Ophelia obviously values Laertes opinion as she states she will 'effects of this good lesson keep', however she tell Laertes that he should take a leaf out of his own book and follow his own advice by saying 'do not, as some ungracious pastors do' From this conversation between the two of them, we see how the closeness between them meant their intentions towards each other were always good. ...read more.

For instance, during his soliloquy, Hamlet talks rather morbidly: 'to be or not to be'. Talking about suicide is associated with madness, and this therefore infers that Hamlet's sanity is not quite whole, which implies that his actions aren't 100% his own. However, we can see Hamlet's conscience is intact, as he almost asks for forgiveness for what he's about to do to Ophelia, 'be all my sins remembered'. By saying this, Hamlet shows the audience he must care a little for Ophelia, no matter what he says to her face. Being spied upon by Polonious and Claudius causes Hamlet's actions and words to be exaggerated, 'i am very proud, revengeful, ambitious', so as to portray his apparent madness to the King and his subordinate. By doing this it is made obvious to the audience that Hamlet is putting on a show, and therefore being purposefully vindictive to Ophelia. This cruelty to Ophelia adds to her confusion and madness, as his behaviour is so erratic she knows not what to believe when Hamlet talks to her. A sense of madness in Hamlet is conveyed in the way he talks in riddles, confusing both himself and Ophelia. Where Hamlet says 'puzzles the will', we see his exaggeration of his madness and the fact he is purposefully playing up, indicating that his sanity is intact enough to plot and conceive plans. After Hamlet's grand entrance, Ophelia changes the topic to their relationship state, as she has been instructed to do, yet again conveying to the audience the fact that Ophelia is trapped. Due to the fact Hamlet knows he is being spied upon he states that ' i never gave you aught', meaning he didn't give her any indication he liked her. We know this to be a blatant lie, as we have heard of the interactions between them both that have been going on. He then admits that he did like her by saying 'i did love you once', and then again changing his mind by saying 'i loved you not'. ...read more.

In conclusion, Hamlet definitely had a massive part to play in Ophelia's death. However, he was not the only one to blame. Laertes did hardly anything wrong, other than going when she needed him most, which was not his decision to make but Claudius's. Therefore Laertes is not to blame for this, more so Claudius is the one to blame. Polonius's lack of trust and constant betrayal of Ophelia to Claudius, also led to Ophelia's death. Therefore we can see he did have reason to be blamed for her death. However, Claudius was the one initially guiding and instructing Polonious; therefore he is to blame for this as well. Gertrude had only a small part to play in Ophelia's death. Rather than being a mother figure to Ophelia, which is what she needed, Gertrude was weak towards Claudius and did not stand up for herself like Ophelia needed her female influence to do. However, yet again this is not alone Gertrude's fault, as Claudius was yet again leading her, and she did what she did to please him as he seduced her into it. Lastly, Claudius was at fault for Ophelia's death as his murder of Old Hamlet was the catalyst for all the events that led up to her death. Although he did not do anything to her directly, he had the most indirect effect on her. All of his decisions, such as sending people to spy on herself and Hamlet, ended up having a bad effect on their relationship which led to her madness. Therefore, we can see Claudius as having the biggest amount of blame out of all the characters, second to Hamlet. Hamlet is still in my view the one holding the most responsibility for her death as he toyed her with her by sending confusing mixed messages out of malice, not always madness. Therefore I believe Hamlet is mainly to blame for Ophelia's death directly, but Claudius played a big part of it indirectly without eve Ophelia herself noticing. By Hayley Toms ...read more.