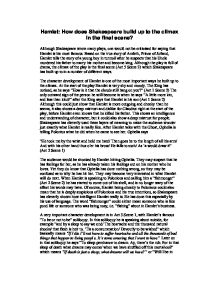 Hamlet: How does Shakespeare build up to the climax in the final scene?

Hamlet: How does Shakespeare build up to the climax in the final scene? Although Shakespeare wrote many plays, one would not be criticised for saying that Hamlet is his most famous. Based on the true story of Amleth, Prince of Jutland, Hamlet tells the story of a young boy in turmoil after he suspects that his Uncle murdered his father to marry his mother and become king. Although the play is full of drama, the climax of the play is the final scene (Act 5 Scene 2) which Shakespeare has built up to in a number of different ways. The character development of Hamlet is one of the most important ways he built up to the climax. At the start of the play Hamlet is very shy and moody. The King has noticed, as he says "How is it that the clouds still hang on you?" (Act 1 Scene 2) The only outward sign of the person he will become is when he says "A little more kin, and less than kind!" after the King says that Hamlet is his son (Act 1 Scene 2) Although this could just show that Hamlet is more outgoing and cheeky than he seems, it also shows a deep mistrust and dislike for Claudius right at the start of the play, before Hamlet even knows that he killed his father. This shows an intelligence and understanding of character, but it could also show a deep mistrust for people. Shakespeare has cleverly used these layers of meaning to make the audience wonder just exactly what Hamlet is really like. After Hamlet talks with the Ghost, Ophelia is telling Polonius what he did when he came to see her. Ophelia says "He took me by the wrist and held me hard/ Then goes he to the length of all his arm/ And with his other hand thus o'er his brow/ He falls to such/ As 'a would draw it" (Act 2 Scene 1) ...read more.

The tension of when and where will it happen is a fantastic build up to the final climax. In the final scene, Act 5 Scene 2 he is talking to Horatio with no feelings of guilt or remorse for killing his friends, i.e. "They are not near my conscience" He is, in fact, boasting about killing his friends by going into lots of unnecessary detail about what he did. This is when the development of Hamlet is complete: he has turned from a innocent and slightly awkward boy into a ruthless and cunning man. This builds up to the climax as the climax of the play is where Hamlet is fully developed. I mentioned in the above paragraph about Gertrude. Throughout the play she has two personas: fierce and dependant woman who is disloyal to her husband and shy, innocent woman who has been tricked into marrying an evil man. At the start she is the first persona, encouraging Hamlet to stop grieving for his father ("Cast thy nighted colour off" Act 1 Scene 2) This will make the audience feel cross with her, and may even make them wonder whether she ought to be punished in some way as well as Claudius. She also has this persona when she is telling Hamlet off, but when he says "Where you may see the inmost part of you" she thinks he is going to kill her (he actually was talking about seeing inside her soul) and the persona drops and she becomes weak and scared, crying out for help. Later in this scene she is totally on Hamlet's side, saying "What shall I do?" when he tells about his plan. This persona switch ties in with a recurring theme in the play that all is not what it seems, i.e. Claudius being so kind in the final scene, Hamlet being insane, Rosencrantz and Guildenstern pretending to be Hamlet's friends. ...read more.

Shakespeare realised that if Horatio was not there, Hamlet would have no-one to grieve for all his loved ones (Gertrude, Ophelia, his father) have been killed and Hamlet is not really a bad person. The response to this is that the audience goes away thinking that Hamlet was right to do what he is, even if beforehand they were having doubts. Shakespeare has done this to make it very clear that Hamlet isn't just a "main character" in a play, he is the hero and he is the good person in the play. The final scene is very dramatic, not just because Shakespeare has built up to it but because Shakespeare has used many devices in this too. There is dramatic irony, because the audience knows that Laertes is going to try to kill Hamlet but Hamlet doesn't know. There's also irony in the fact that Claudius is cheering on Hamlet and calling him his son but is actually plotting to kill him. The short sentences in the fight also add drama, because the fewer lines there are to say, the more action there is to take their place. When Hamlet discovers that Claudius has killed his mother as well as his father, plus plotted to kill him he goes slightly crazy which adds the drama of "What is he going to do?" When Hamlet finally kills Claudius, it is right at the end of the play so the tension that was there right from the start has built up right until the very end. Even though Hamlet has done so many bad things, Shakespeare has cleverly written it so that Hamlet feels like a close friend to the audience, and like a close friend you can forgive him what he's done. It's using these methods that Shakespeare has built up to the climax. By developing things steadily throughout the play, i.e. Hamlet's character, the friendship between Horatio and Hamlet, and letting Hamlet loose in the final scene, the climax is just about as climactic as it could be. ...read more.