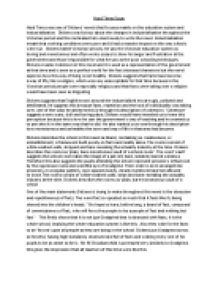 Hard Times was one of Dickens novels that focuses mainly on the education system and industrialisation.

﻿Hard Times Essay Hard Times was one of Dickens? novels that focuses mainly on the education system and industrialisation. Dickens was furious about the changes in industrialisation throughout the Victorian period and this motivated him enormously to write the novel. Industrialisation meant that working conditions were poor and it had a massive impact on the way schools were run. Dickens hated Victorian schools; he saw the Victorian education system as boring and monotonous and often wrote essays to show his anger and frustration at the government and those responsible for what he saw as the poor schooling techniques. Dickens creates Coketown in this novel and it is used as a representation of the government at that time and is seen as a perfect world for the fact obsessed characters but the novel explores how this way of living is not healthy. Dickens suggests that facts have become a way of life, like a religion, which was very unacceptable for that time because in the Victorian period people were especially religious and that facts were taking over a religion would have been seen as disgusting Dickens suggests that English towns around the industrialized era are ugly, polluted and debilitated, he suggests this because facts, repetition and the lack of individuality was taking over, one of the ways he achieves this is through his description of coketown. ...read more.

Bitzer gives a factual definition: "Quadruped. Graminivorous. Forty teeth, namely twenty-four grinders, four-eye teeth, and twelve incisive." This pleases Gradgrind, but it comes nowhere near to suggesting the capacities of the horse as symbolized by Pegasus. The book hard times is split up into two sections ?reaping? and ?sowing?. These two titles have a significance to the story because at the beginning of the novel Gradgrind is force feeding the students facts and little did he know this would come back to haunt him later on in the novel. He is sowing the seeds which is a metaphor for him force feeding children facts and reaping the crops is a metaphor for when Bitzer ironically turns his back on Gradgrind. Lastly, it is clear that one of Dickens? aims in writing this novel is to comment on his thoughts about the monotonous education system at the time. It was written in an attempt to challenge the view of this society at a time when practicality and facts were of greater importance and value than feelings and persons. Names- Dickens also uses characters from the novels names to represent his anger at the point he was trying to get across such as ?Mr. M?Choakumchild? chokes his pupils with facts and Thomas Gradgrind grinds down the children. He shows his hatred for Victorian schools clearly in 'Hard Times' and especially in his description of Gradgrind. ...read more.