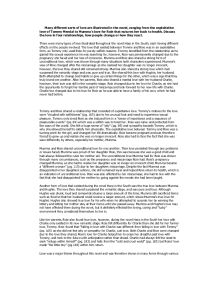 Harp in the South - Discuss the love in four relationships, how people change or how they react.

HARP IN THE SOUTH. Many different sorts of love are illustrated in the novel, ranging from the exploitative love of Tommy Mendal to Mumma's love for Roie that nutures her back to health. Discuss the love in four relationships, how people change or how they react. There were many types of love illustrated throughout the novel Harp in the South, each having different effects on the people involved. The love that existed between Tommy and Roie was in an exploitative form, as Tommy only used Roie for purely selfish reasons. Tommy benefited from the relationship as he gained the sexual experience he was searching for, however, Roie was permanently changed due to the pregnancy she faced and her loss of innocence. Mumma and Roie also shared a strong form of unconditional love, which was shown through many situations both characters experienced. Mumma's view of Roie changed after the miscarriage as she realised her daughter was no longer innocent, however, the love they shared still remained strong. ...read more.

Roie also had to face the fact that she was seen differently by others, especially her mother, Mumma. Mumma and Roie shared unconditional love for one another. Their love persisted through any problems or issues faced. Mumma was proud of her daughter Roie, this was because she was a good child and had always followed the rules her mother set. The unconditional love Mumma had for Roie was shown through many circumstances, such as the pregnancy and miscarriage Roie had. Roie's pregnancy changed Mumma, as she had to realise her daughter was no longer an innocent child. Mumma became a "different woman" (pg. 115) due to her daughters miscarriage. Despite the fact Mumma was disappointed in her daughters actions, she still remained loyal and helped Roie return to health, which is an indication of unconditional love. Roie was also affected by her miscarriage, she had to live with the fact that she had disappointed her mother by going against the morals she had been taught. ...read more.

183) but Roies' love made "the little boy" (pg 183) within him return. Love was a major theme throughout this novel and was therefore shown in many forms through various relationships. The love between Tommy and Roie was exploitative and changed both characters, especially Roie. Roie was forced to realise she was no longer and innocent child. The unconditional love between Roie and Mumma was evident during the novel, and both characters were effected by it. Mummas' view of Roie was altered, as she learnt her daugter was no longer innocent, and Roie also faced that she had to live with the mistakes she had made and the way they effected other people. Mumma and Hughie's true love was another major relationship which effected the way the Darcy family lived and made their lives somewhat happier. The true love between Roie and Charlie was also true, but still existed in its romantic stage. Both Roie and Charlie were changed due to their love, as they were both able to forget sadness and problems from their past lives and had something special to look forward to. Kylie Matonia SOUTH AUSTRALIA ...read more.