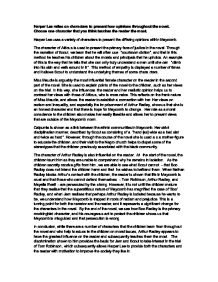 Harper Lee relies on characters to present how opinions throughout the novel. Choose one character that you think teaches the reader the most

Harper Lee relies on characters to present how opinions throughout the novel. Choose one character that you think teaches the reader the most. Harper Lee uses a variety of characters to present the differing opinions within Maycomb. The character of Atticus is used to present the primary face of justice in the novel. Through the narration of Scout, we learn that he will often use "courtroom diction", and that in this method he teaches his children about the morals and principals that he upholds. An example of this is the way that he tells that she can only truly understand a man until she can "climb into his skin and walk around in it". ...read more.

Her role as a moral conscience to the children also makes her easily likeable and allows her to present views that are outside of the Maycomb norm. Calpurnia is shown as a link between the ethnic communities in Maycomb. Her strict disciplinarian manner, described by Scout as consisting of a "hand [as] wide as a bed slat and twice as hard". However, through the course of the novel she is used as a mother-figure to educate the children, and their visit to the Negro church helps to dispel some of the stereotypes that the children previously associated with the black community. The character of Arthur Radley is also influential on the reader. ...read more.

This is a turning point for both the narrator and the reader, and it represents a significant change for the characters in the novel. By the end of the novel, we see how Boo Radley is the primary mockingbird character, and his courageous act to protect the children shows us that Maycomb is misguided and that persecution is wrong. In conclusion, while there are a number of characters that the children learn from throughout the novel and who help to educate the children on moral issues, Arthur Radley appears to have the greatest influence on the reader and subsequently teaches them the most. The discrimination shown to him provides the basis for Jem and Scout to take interest in the trial of Tom Robinson, which subsequently allows Harper Lee to provide both the characters and the reader with motivation to improve the society they live in. ?? ?? ?? ?? ...read more.