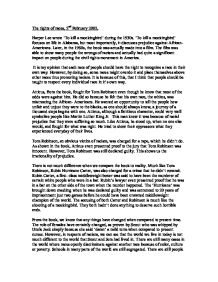 Harper Lee wrote 'To kill a mockingbird' during the 1930s.

The rights of races, 2nd February 2002, Harper Lee wrote 'To kill a mockingbird' during the 1930s. 'To kill a mockingbird' focuses on life in Alabama, but most importantly, it discusses prejudice against African- Americans. Later, in the 1960s, the book was actually made into a film. The film was able to show many people the wrongs of racism and actually had quite a significant impact on people during the civil rights movement in America. It is my opinion that each race of people should have the right to recognize a race in their own way. However, by doing so, some races might overdo it and place themselves above other races thus promoting racism. It is because of this, that I think that people should be taught to respect every individual race in it's own way. Atticus, from the book, fought for Tom Robinson even though he knew that most of the odds were against him. He did so because he felt that his own race, the whites, was mistreating the African- Americans. ...read more.

The 'Hurricane' was brought down crashing when he was declared guilty and was sentenced to 20 years of imprisonment just two games before he could have been crowned middleweight champion of the world. The accusing of both Carter and Robinson is much like the shooting of a mockingbird. They both hadn't done anything to deserve such horrible ends. From the book, we know that any things have changed when compared to present time. The role of females have certainly changed, as proven by Scout who was whipped by Uncle Jack simply because she said 'damn' a mild term when compared to present curses. However, in respects of racism, we can see that the world we live in today is not much different to the world that Scout and Jem had lived in. There are still many cases in the world where races openly discriminate against another race because of color, culture or poverty. Schools in many parts of the world are still segregated. There are still people who throw around terms such as 'nigger- lover', which are not much of insults, when thought about. ...read more.

This is a bad sign and that is why groups of terrorists such as these should be eradicated. In the book, Atticus says, "It is a sin to kill a mockingbird." A mockingbird is a harmless little bird, which helps brighten the world with its song. To kill or even harm one would be a sin. From reading the story, we know that the mockingbird is Tom Robinson. This is because he has done nothing, but yet he is treated upon so different from everyone. Tom Robinson hoped only to help Mayella but ended up in court. He was charged and sent to prison, isolated from everyone, and died in a desperate attempt to escape his cage. By reading the book, we think that it is talking about prejudice. In actual fact, Harper Lee has only said that killing a person who has done nothing is a sin. But by putting a black man i.e. Tom Robinson there; she was able to convey to us that prejudice is what brings us to do such things. In other words, prejudice is the sin. Kenny Lee, 10S ...read more.