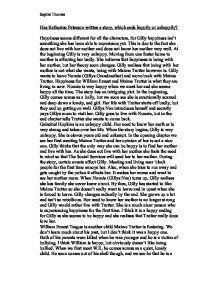 Has Katherine Paterson written a story, which ends happily or unhappily?

Has Katherine Paterson written a story, which ends happily or unhappily? Happiness seems different for all the characters, for Gilly happiness isn't something she has been able to experience yet. This is due to the fact she does not live with her mother and does not know her mother very well. At the beginning Gilly is very unhappy. Moving from one foster home to another is affecting her badly. She believes that happiness is being with her mother, but her theory soon changes. Gilly realises that being with her mother is not what she wants, being with Maime Trotter however is. Gilly wants to leave Nonnie (Gillys Grandmother) and move back with Maime Trotter. Happiness for William Ernest and Maime Trotter is what they are living in now. Nonnie is very happy when we meet her and she seems happy all the time. The story has an intriguing plot. In the beginning, Gilly comes across as a bully, but we soon see she is emotionally scarred and deep down a lonely, sad girl. Her life with Trotter starts off badly, but they end up getting on well. Gillys Nan introduces herself and secretly pays Gillys mum to visit her. ...read more.

I think William is happy, but obviously doesn't like being bullied. When we first meet W.E, he comes across as a quiet, lonely child. He soon comes out of his shell though, and we see he that he is a talkative, bright boy. At first, Gilly bullies W.E, but she realises that it isn't very nice, so she tries to get along with him. He begins to like her and they end up being best friends. When Gilly runs away and gets caught, it really hurts W.E. He is devastated because by then they are really close and does not want her to leave 'Don't go.' Pg.84. When she leaves to go and live with Nonnie, he is really upset but he knows that is what she wants so doesn't say much. By the end, Gilly has made William a lot braver and he sticks up for himself more, but the main thing he wants is for Gilly to come home. When we first meet Maime Trotter she seems happy and a friendly person. Gilly doesn't like her, but when Gilly tries to run away Maime Trotter realises she really loves Gilly and when Miss Ellis tells Gilly it would be good for Gilly to go to a different foster home, Maime Trotter won't let Gilly go. ...read more.

The beginning was quite boring as it was just about Gilly settling into her new home, but the book got much better. The first couple of chapters were quite sad because they explained about Gillys life and her life isn't a very happy one. I learnt that you should never take anything for granted and you should always give things or people a chance. Gilly didn't give William Ernest or Maime Trotter a chance, she immediately thought they weren't up to her standards, but after a while she realised they were just like her. My views of the characters did change during the story. At the start, I really did not like Gilly; I thought she was really mean and a horrible person. As the book continued though, I realised she was a lonely, hurt person who was rebellious for a reason. She needed love. I thought the ending was a happy one because Gilly wants to come home rather than staying with Nonnie and her mother. All those years she wanted to be with her mother and when they actually met, she didn't like her. She just wanted Maime Trotter. I do hope that Gilly goes back to live with Maime Trotter, because I think that Maime Trotter is the only person Gilly has ever loved in her life. By, Sophie Thomas 9W Sophie Thomas ...read more.