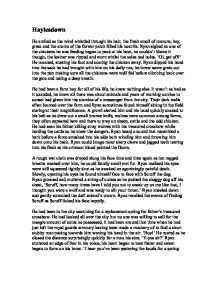 Haylesdown He smiled as the wind whistled through his hair, the fresh smell of manure; hay, grass and the aroma of the flower patch filled his nostrils. Ryan sighed as one of the chickens he was feeding began to peck at his boot, he couldn't blame it though, the leather was ripped and worn whilst the soles had holes. 'Oi, get off!' He moaned, shaking his foot and scaring the chicken away. Ryan dipped his hand into the sack he had brought with him on his daily run; he threw some grain out into the pen making sure all the chickens were well fed before climbing back over the gate and taking a deep breath. He had been a farm boy for all of his life, he knew nothing else. It wasn't as bad as it sounded, he knew all there was about animals and years of working sunrise to sunset had given him the stamina of a messenger from the city. Their dark walls often loomed over the farm and Ryan sometimes found himself sitting in the field staring at their magnificence. A growl alerted him and his hand quickly snaked to his belt as he drew out a small bronze knife, wolves were common among farms, they often appeared here and there to prey on sheep, cattle and the odd chicken. He had seen his father killing stray wolves with his treasured crossbow while herding the cattle so he knew the dangers. Ryan heard a sound that resembled a bark before a force smashed into his side both winding him and throwing him down onto his back. Ryan could image razor sharp claws and jagged teeth tearing into his flesh as his crimson blood painted the floors. A rough wet cloth was draped along his face time and time again as hot ragged breaths washed over him, he could faintly smell wet fur. ...read more.

Ryan asked as a girl's scream pierced the air, one thought flashed trough his mind. Wolves. Slowly he began to stand, plans flashing through his mind and almost automatically his feet began to sprint towards the direction of the farm house, he burst through the door Scruff hot on his heels as he flung open the cabinet retrieving fathers crossbow, he slung a quiver of bolts over his shoulder and ran outside crouching in front of Scruff. 'Where is she Scruff, where is she? Lead me to the girl boy, lead me to the scream.' Scruff barked once in understanding and set off quickly towards the fields where the cattle and sheep are kept, 'Not so fast boy!' Ryan shouted struggling to keep up. Jennifer stumbled backwards as she stepped away from the dead lambs, she looked all around her and on closer inspection she found all the animals had been killed, their insides emptied by some horrible monster. She lost her footing and shouted out as she began to fall backwards, strong arms caught her as tears began to flow down her cheeks, she screamed at the contact and looked up. Ryan looked down at her and smiled muttering soothing words as Jennifer put her arms around him holding him in a tight embrace, Ryan took the opportunity to survey the situation, all of the sheep had been killed, at least fifty maybe more. Scruff sat looking at him scared, 'Don't worry boy, we'll be okay.' He said soothingly, the dog barked once and its posture relaxed a little. Ryan began to stand up pulling the girl up with him, 'Are you okay?' he asked looking deep into her eyes. Jennifer looked at the farm boy and smiled, 'Erm, yes I'm fine. Thank you.' Ryan nodded and smiled back; they both turned and looked at the massacre of dead sheep around them, 'What happened here?' ...read more.

It cried out as it tried to stop or alter it's course but it was going to fast and had covered to much of a great distance. Ryan screamed and stabbed forward with all his strength, the blade easily cut through the flesh and muscle, it clipped a bone jarring Ryan's bad shoulder but still he pushed forward until the blade cut straight through the heart. The blade continued to travel until it burst out from the monsters back and Ryan and it were in a hug like embrace, Ryan could feel it's claws trying to cut his back open but Ryan had destroyed the last of its strength. Turning his body Ryan let the monster fall off of the sword and onto the barn floor as crimson painted the floors. Ryan staggered backwards as his legs gave away and the adrenaline left his system. Ryan opened his eyes to find Jennifer kneeling beside him wiping the blood from his face, 'Are you okay?' She asked gently as Ryan slowly got up into a sitting position. His head spun and his entire body seemed to hurt, 'I'll live.' He croaked, as Jennifer leant forward and kissed him gently on the lips. 'That's for saving my life,' she said quietly as the two looked deep into each others eyes. Ryan leant forward and kissed her on the lips, 'That's for saving mine.' Scruff padded up to them and licked Jennifer on the cheek, 'Oi,' She laughed stroking the dogs crown. 'I guess that's thanks for saving his as well.' Ryan chuckled before coughing and clearing his throat as he spat a gob full of blood onto the dirt, Jennifer smiled and leant forward throwing her arms around him, holding him tightly. Ryan smiled and gently hugged her back ignoring the cries of protest his body made with every movement. They stayed like that for a long time, ignoring the roars in the distance, the warning bell in the city and the cries of pain, dismay and horror that soon followed. Kyran-Storm Curry. ?? ?? ?? ?? ...read more.