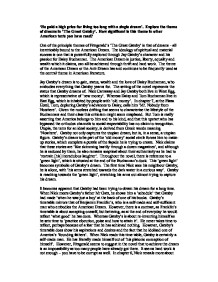 'He paid a high price for living too long with a single dream'. Explore the theme of dreams in 'The Great Gatsby'. How significant is this theme in other American texts you have read?

'He paid a high price for living too long with a single dream'. Explore the theme of dreams in 'The Great Gatsby'. How significant is this theme in other American texts you have read? One of the principle themes of Fitzgerald's 'The Great Gatsby' is that of dreams - all inextricably bound to the American Dream. The ideology of spiritual and material success is one that is powerfully explored through Jay Gatsby's character and his passion for Daisy Buchannan. The American Dream is justice, liberty, equality and wealth which it claims, can all be achieved through thrift and hard work. The theme of the American Dream or the Anti-Dream has and continues to be frequently used as the central theme in American literature. Jay Gatsby's dream is to gain, status, wealth and the love of Daisy Buchannan, who embodies everything that Gatsby yearns for. The setting of the novel represents the status that Gatsby dreams of. Nick Carraway and Jay Gatsby both live in West Egg, which is representative of 'new money'. Whereas Daisy and Tom Buchannan live in East Egg, which is inhabited by people with 'old money'. In chapter 7, at the Plaza Hotel, Tom, deploring Gatsby's advances to Daisy, calls him 'Mr. ...read more.

His real brake came when Dan Cody moored his yacht in the shallows of Lake Superior, and young James Gatz warned him of possible danger from high wind. It was at this point that the new name came into being, to match the beauty and glamour which Cody's yacht represented to him. Gatsby was rewarded with an education in the ways of the world from this opportunist millionaire, 'a product of the Nevada silver fields, of the Yukon, of every rush for metal since seventy-five'. However, it was not until he met Daisy Fay that his desire for high status and wealth became stronger than ever before. She had a 'voice full of money' and although they were in love, they could not be together due to there different social status's, for, Daisy was a wealthy Southern girl and Gatsby was a struggling soldier. Gatsby does achieve the wealth he dreamed about as a youngster, although not totally legitimately as the theme of boot-legging, which was the illegal making and selling of alcohol, comes up several times in the novel. However Gatsby did not completely get the dream. Perhaps Fitzgerald is suggesting that it is impracticable to get the whole dream. ...read more.

She seems unable to accept that that wealth her family once had has been lost. Both Gatsby and Blanche do not realise that it is impossible to retrieve the past and have everything as it once was. In John Steinbeck's 'Of Mice and Men', George and Lenny's dream is to be able to 'live off the fatta the land', this is the most important dream of the character's in the novel. Having their own land would enable them to have protection from an inhospitable world; this dream represents a prototypical American ideal. Their journey, which awakens George to the impossibility of this dream, sadly proves that Crooks is right that 'such paradises of freedom, contentment, and safety are not to be found in this world'. Fitzgerald said that 'America's greatest promise is that something is going to happen, and after a while you get tired because nothing happens to people except they grow old'. Although it seems that authors of American literature are anti the American Dream, it is probable that they are not pessimistic at all, except they are stating the importance of knowing the difference between truth and illusion that the past is impossible to retrieve, that in fact there is nothing wrong with having dreams and aspirations, but as Boorstin said, 'the dream is to be reached for and not to be lived in'. ...read more.