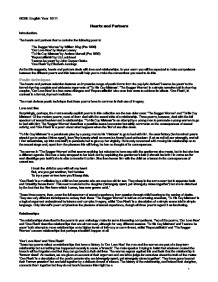 GCSE English Year 10/11 Hearts and Partners Introduction. The hearts and partners theme contains the following poems: 'The Beggar Woman' by William King (Pre 1900) 'Our Love Now' by Martyn Lowery 'To His Coy Mistress' by Andrew Marvell (Pre 1900) 'Rapunzstiltskin' by Liz Lochhead 'i wanna be yours' by John Cooper Clarke 'One Flesh' by Elizabeth Jennings As the title suggests, hearts and partners deals with love and relationships. In your exam you will be expected to make comparisons between the different poems and this lesson will help you to make the connections you need to do this. Poetic techniques The hearts and partners selection features an impressive range of poetic forms from the pop lyric derived 'i wanna be yours' to the formal rhyming couplets and elaborate arguments of 'To His Coy Mistress'. 'The Beggar Woman' is a simple narrative told in rhyming couples, 'Our Love Now' is a free verse dialogue and 'Rapunzstiltskin' also uses free verse to achieve its effects. 'One Flesh', in contrast is a formal, rhymed meditation. The most obvious poetic technique that these poems have in common is their use of imagery. Love and Sex Surprisingly, perhaps, the most sexually explicit poems in this collection are the two older ones: 'The Beggar Woman' and 'To His Coy Mistress'. Of the modern poems, none of them deal with the sexual side of a relationship. Three poems, however, deal with the full spectrum of sexual involvement in relationships. 'To His Coy Mistress' is an attempt by a young man to persuade a young woman to go to bed with him; The 'Beggar Woman' describes a possible sexual encounter but wittily comments on the consequences of sexual activity; and 'One Flesh' is a poem about what happens when the 'fire' of sex dies down. 'To His Coy Mistress' is a passionate plea by a young man to his 'mistress' to go to bed with him. ...read more.

We would sit down, and think which way To walk, and pass our long love's day. 5 Thou by the Indian Ganges' side Should'st rubies find: I by the tide Of Humber would complain. I would Love you ten years before the flood: And you should, if you please, refuse, 10 Till the conversion of the Jews. My vegetable love should grow Vaster than empires, and more slow. A hundred years should go to praise Thine eyes, and on thy forehead gaze. 15 Two hundred to adore each breast: But thirty thousand to the rest. An age at least to every part, And the last age should show your heart: For, lady, you deserve this state; 20 Nor would I love at lower rate. But at my back I always hear Time's winged chariot hurrying near: And yonder all before us lie Deserts of vast eternity. 25 Thy beauty shall no more be found; Nor, in thy marble vault, shall sound My echoing song: then worms shall try That long-preserved virginity: And your quaint honour turn to dust; 30 And into ashes all my lust. The grave's a fine and private place, But none, I think do there embrace. Now, therefore, while the youthful hue Sits on thy skin like morning dew, 35 And while thy willing soul transpires At every pore with instant fires, Now let us sport us while we may; And now, like amorous birds of prey, Rather at once our time devour, 40 Than languish in his slow-chapped power. Let us roll all our strength, and all Our sweetness, up into one ball: And tear our pleasures with rough strife, Thorough the iron gates of life. 45 Thus, though we cannot make our sun Stand still, yet we will make him run. Here is a glossary for you to help you understand the poem better. Coy - shy or retiring India was thought to be very rich and exotic It was imagined, in the 17th century, that rubies could assist ...read more.

Rhyme and meter There is a definite rhyme scheme in this poem. Stanzas 1 and 2 have a strict pattern of ababcccd. Stanza 3 differs and has a pattern of ababcdcececc plus the final two lines that do not rhyme. This might reflect the fact that in stanza 3 the speaker extends the number of lines and leads up to the specific point (in a coda) that his love is deep and he doesn't want to be anyone else's. It is common in song lyrics to have a variation of pattern such as this. The lines lend themselves to the possibility of song, and you imagine hearing the repetition of 'deep' at the end of the lyric as the conclusion of a song. Even the use of 'wanna' is typical of song lyrics. The meter is regular as well. Read the first few lines of the first stanza aloud and you will hear it. There is a stressed syllable followed by a light one until the last two lines. Lines 1-6 are in what we call trochaic meter. Lines 7-8 follow a different pattern of a stressed syllable followed by two light ones. This is called dactylic. Regular rhyme and meter create the musical effect that would make the words suitable as lyrics, but they also provide the definite effect needed for the repetition and emphasis of the speaker's feelings and the point he builds up to at the end of the poem. The conclusion This poem provides a different point of reference from the others in the section 'Hearts and Partners'. It presents us with an apparently utterly devoted and well-meaning man who wants to fulfill everything his girl could wish for. It is a contrast to The Beggar Woman and To His Coy Mistress, which feature men who use women sexually, and Rapunzstiltskin, in which the man is totally insensitive to what the woman wants. One Flesh, Elizabeth Jennings The title The phrase 'one flesh' is found in the Christian marriage service. Its origin is the first book of the Christian Bible, Genesis 1:20-24. ...read more.