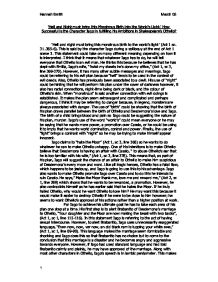 'Hell and Night must bring this Monstrous Birth into the World's Light.' How Successful is the Character Iago in fulfilling his Ambitions in Shakespeare's Othello?

'Hell and Night must bring this Monstrous Birth into the World's Light.' How Successful is the Character Iago in fulfilling his Ambitions in Shakespeare's Othello? 'Hell and night must bring this monstrous birth to the world's light' (Act 1 sc. 3 L.385-6). This is said by the character Iago during a soliloquy at the end of Act 1 scene 3. This statement could take on many different meaning depending on how it is interpreted. I think that it means that whatever Iago has to do, he will tell everyone that Othello is an evil man. He thinks this because he believes that he has slept with Emilia, Iago's wife, "'twixt my sheets he's done my office," (Act 1, sc 3, line 369-370). However, it has many other subtle messages and meanings. Iago could be referring to his evil plan because "hell" tends to be used in the context of evil deeds. Also, Othello has previously been associated to a devil. His use of "night" could be hinting that he will perform his plan under the cover of darkness however, it also has racial connections, night-time being dark or black, and the colour of Othello's skin. When "monstrous" is said another connection with evil doings is established. It makes the plan seem extravagant and complicated and perhaps dangerous, I think it may be referring to danger because, in legend, monsters are always associated with danger. The use of "birth" could be showing that the birth of his plan draws parallel between the birth of Othello and Desdemona's love and Iago. The birth of a child brings blood and pain so Iago could be suggesting the nature of his plan, murder. ...read more.

and "white ewe" (act 1, sc 1 line 88). He does this so that the events are clearer to the audience and are easier to understand. Shakespeare uses figurative language and linguistic patterns to help to reinforce the themes and ideas that the dramatist wishes to explore. In Act 3 Scene 3, Iago is trying to convince Othello of Desdemona's infidelity. To do this Iago uses a large number of hints, arguments and insinuations in order to persuade him of a lie. Iago says, "Ha! I like that not." (Act 3, sc 3, line 35) where he is referring to Desdemona talking to Cassio. He does this to make Othello feel insecure about his relationship with Desdemona and to make Othello demote Cassio so that he is kept away from Desdemona in order for Iago to gain Cassio's position. He also says, "he would steal away so guilty-like seeing you coming." (Act 3, sc 3, line 43-44) This makes Othello suspicious of Cassio as well as angry with Desdemona for supposedly cheating on him. He then tries to convince Othello that he is an honest man and in no way jealous of anything, "My lord, you know I love you." (Act 3, sc 3, line 118). He does this so that Othello thinks he can believe all that Iago says as the truth. Iago then attempts to make Othello suspicious of Desdemona's every action so Othello decides to watch her constantly. He gets Emilia, Iago's wife, to do this for him, "Set on thy wife to observe", (act 3, sc 3, line 242). ...read more.

Therefore, if it is given away then their relationship would end and their love would take separate paths. Ultimately, the handkerchief marked the beginning and the end of the relationship because it gave Othello the proof that he needed to persecute Desdemona. Throughout the play Othello, more and more of Iago's ambitions appear to emerge. He did succeed in getting Cassio demoted, he did destroy Othello and Desdemona's relationship and he did gain money from Roderigo so overall his plan was a success. However, none of this occurred without personal losses, he killed his wife and was injured. To a certain extent this did lessen his success because in the end he sacrificed a lot and gained nothing. Othello died knowing that he was not betrayed by Desdemona, he could not gain Cassio's ranking because the job no longer existed and money is no use in prison, however he did ruin many lives. Iago mentions a variety of intentions openly however it is possible that he had darker ones that he did not expose to the audience. These may have included taking over Othello's ranking, being romantically linked to Desdemona or perhaps Othello himself considering the homosexual meaning of the play. Ultimately, it was jealousy that caused the bulk of Othello and Desdemona's misfortune however this jealousy was formed from thin air by Iago. If Othello had not been so troubled by jealousy then their relationship may have survived. In Shakespeare's Othello, the character Iago is fairly successful in fulfilling his ambitions however he did not do it purely himself. He played on others weaknesses so as to get what he wanted. His success would have been far greater if it had not caused so many casualties and fatalities. Hannah Smith March 05 1 ...read more.