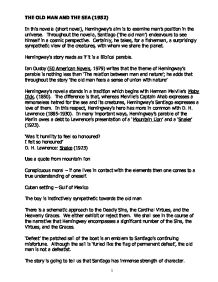 Hemingway's The Old Man and The Sea - complete set of notes, page by page

THE OLD MAN AND THE SEA (1952) In this novella (short novel), Hemingway's aim is to examine man's position in the universe. Throughout the novella, Santiago ('the old man') endeavours to see himself in a cosmic perspective. Certainly, he takes, for a fisherman, a surprisingly sympathetic view of the creatures, with whom we share the planet. Hemingway's story reads as if it is a Biblical parable. Ian Ousby (50 American Novels, 1979) writes that the theme of Hemingway's parable is nothing less than 'The relation between man and nature'; he adds that throughout the story 'the old man feels a sense of union with nature' Hemingway's novella stands in a tradition which begins with Herman Melville's Moby Dick, (1850). The difference is that, whereas Melville's Captain Ahab expresses a remorseless hatred for the sea and its creatures, Hemingway's Santiago expresses a love of them. In this respect, Hemingway's hero has more in common with D. H. Lawrence (1885-1930). In many important ways, Hemingway's parable of the Marlin owes a debt to Lawrence's presentation of a 'Mountain Lion' and a 'Snake' (1923). 'Was it humility to feel so honoured? I felt so honoured' D. H. Lawrence: Snake (1923) Use a quote from mountain lion Conspicuous moral - if one lives in contact with the elements then one comes to a true understanding of oneself. Cuban setting - Gulf of Mexico The boy is instinctively sympathetic towards the old man There is a schematic approach to the Deadly Sins, the Cardinal Virtues, and the Heavenly Graces. We either exhibit or reject them. We shall see in the course of the narrative that Hemingway encompasses a significant number of the Sins, the Virtues, and the Graces. 'Defeat' the patched sail of the boat is an emblem to Santiago's continuing misfortune. Although the sail is 'furled like the flag of permanent defeat', the old man is not a defeatist. ...read more.

He reminds himself that fishing is his vocation ('the thing that I was born for'). The old man demonstrates two qualities: independence and self-sufficiency; he has to rely on his own resources and physical and moral strength. He demonstrates both practical and moral reliance, and practical and moral resourcefulness. In every way, the old man needs to be self-sufficient because he is no longer fishing with the boy. He has to redefine his sense of identity in complete isolation. Page 37 Manfully, Santiago comes to terms with his isolation and resolves to meet the sea alone. The old man, although a follower of base ball, resolves to 'play the ball from where it lies' Bobby Jones (1902-1971) (famous golfer) The old man resolves to be uncomplaining - fortitude Having hooked the 'big fish' he becomes engaged in as trial of strength, both physically and morally. He makes a vow to the fish to bring it home, even if it kills him ("Fish,' he said softly, aloud, 'I'll stay with you until I am dead.'). It has become a test of willpower, almost a contest ('I can do it as long as he can'); he is trying to outstay the marlin. Page 38 'The old man realised' that the fish wasn't tiring; that he was indefatigable ('the fish was not tiring'). Hemingway's description of the line ('taut up to the very edge of the breaking point') is at the same time a description of the old man. There is a tension between two impulses in the old man. On the one hand, love and respect for the fish, on the other hand, a resolution to outstay and kill the fish. There is a constant dialogue between the old man and the fish. Page 39 On this occasion, the old man opens up conversation with a 'small bird' that has come to rest on the 'taut line'. ...read more.

At this point he is consoling himself that he still has 'half' of the fish. The final test of his character will come after the 7th shark attack, when a 'pack' of sharks entirely strip the carcass of flesh. Despite Santiago's best efforts, he loses every bit of the fish except its skeleton ('there was nothing more for them to eat'). Page 86 'He knew he was beaten now finally and without remedy' His language empathises with that the old man has suffered a complete defeat. This defeat Santiago admits gracefully, accepting that he made a tactical mistake that cost him his fish: 'I went out too far' In defeat, Santiago shows humility. Page 88 The conclusion of the story emphasises Santiago's tiredness: 'He had to sit down five times before he reached his shack' It emphasises also the fidelity of the boy ('the boy looked in the door') and the sympathy of the townspeople ('tell him how sorry I am'). Page 89 Even the townspeople can see that Santiago has lost an epic battle to bring ashore a mythical fish ('there has never been such a fish'). gvji hjkv zdc zxc xcz Page 91 Hemingway stresses the selfless relationship between the old man and the young boy. Manolin remains positive, telling the old man that he still wants to fish with him ('we will fish together now') even though his family may disapprove. Manolin will stay true to the old man, not least because he can 'learn' from him the cardinal virtues. Significantly the boy asks him 'how much did you suffer?' and the old man replies 'plenty'. Manolin's response is to bring him provisions. Already, Manolin has learned generosity. Page 92 The final image of the book is the 'long white spine' of the 'great fish'. All that is left of Santiago's stoical struggle, all that he has to show for his suffering is 'now just garbage'. The moral of the story is that an old man's biggest gains in life are not material but spiritual ('dreaming about the lions'). ***THE END*** 18 1 ...read more.