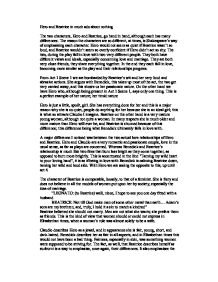 Hero and Beatrice in much ado about nothing

Hero and Beatrice in much ado about nothing The two characters, Hero and Beatrice, go hand in hand, although each has many differences. The reason the characters are so different, at times, is Shakespeare's way of emphasising each character. Hero would not seem as quiet if Beatrice wasn't so loud, and Beatrice wouldn't seem so overly confident if Hero didn't act so shy. The two, during the play fall in love with two very different people. They both have different views and ideals, especially concerning love and marriage. They are both very close friends, they share everything together. In the end they each fall in love, becoming more similar as the play and their relationships progress. From Act 1 Scene 1 we are bombarded by Beatrice's wit and her very loud and abrasive actions. She argues with Benedick, this takes up most of the act, the two get very carried away, and this shows us her passionate nature. On the other hand we have Hero who, although being present in Act 1 Scene 1, says only one thing. This is a perfect example of her nature; her timid nature Hero is just a little, spoilt, girl. She has everything done for her and this is a major reason why she is so quiet, people do anything for her because she is an ideal girl; this is what so attracts Claudio I imagine. ...read more.

The fact, as well, that Beatrice describes herself as sunburnt is a way to emphasise, once again, their differences. It also emphasises the fact that Hero is supposed to be a fairly typical female and Beatrice is supposed to be an extraordinary one. Hero's view on marriage is never expressed by herself, she is too much of a model Elizabethan women to express such views; it is, instead, expressed by her cousin Beatrice. "Yes, faith; it is my cousin's duty to make curtsy and say, 'father as it please you'. But yet for all that, cousin, let him be a handsome fellow, or else make another curtsy and say, 'father as it please me" This quote not only shows us Hero's view on marriage it also shows us some other differences between Hero and Beatrice. First being that Beatrice has no problem being sarcastic towards Hero, and also that Hero is shy of her own character. Antonio poses the question at Hero yet Beatrice replies. We also can see that Beatrice wishes Hero to sometimes stick up for herself, the evidence being the last line of the quote, she wants Hero to say what she wants and stop being shy of her own opinions. This is also true in the opposite sense as regards Beatrice, many people find her nature far too loud and vibrant sometimes, and find her wit to be very rude. ...read more.

Hero's character seems to shy away from all kinds of confrontation, and at the end it seems this is because she does not need to, all the people around her will fight for her no matter what. Shakespeare has created two opposite cousins, characters whose emotions and ideas carry most of the play along. Their differences and similarities help them becoming friends and eventually wives, and at the end of the play we get the idea that they will forever be friends. Hero's shy and timid nature has become a little more forward and confident; she is growing up as the play continues. By the end, although she has learnt a great deal about the world, she is still just a spoilt child, who needs not speak or act because those around will do it for her. With the help of 'cupid's traps', Beatrice's witty enemy Benedick has broken her hard and independent shell. She has lost her anger at being an 'old maid' which made her so fiery and overly witty at the beginning of the play, it has been replaced by a more 'tamed heart', but her passion never leaves her. She is, by the end of the play, more than just the mature young woman she was, I feel she has turned full circle and become her own ideal woman. ...read more.