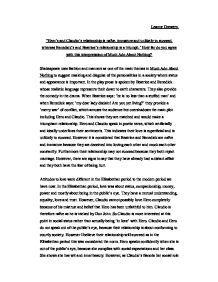 &quot;Hero's and Claudio's relationship is na&amp;iuml;ve, immature and unlikely to succeed, whereas Benedick's and Beatrice's relationship is a triumph.' How far do you agree with this interpretation of Much AdoAbout Nothing?

Leanne Drewery. "Hero's and Claudio's relationship is na�ve, immature and unlikely to succeed, whereas Benedick's and Beatrice's relationship is a triumph.' How far do you agree with this interpretation of Much Ado About Nothing? Shakespeare uses fashion and manners as one of the main themes in Much Ado About Nothing to suggest masking and disguise of the personalities in a society where status and appearance is important. In the play prose is spoken by Beatrice and Benedick whose realistic language represents their down to earth characters. They also provide the comedy in the drama. When Beatrice says: 'he is no less than a stuffed man' and when Benedick says: 'my dear lady disdain! Are you yet living?' they provide a 'merry war' of conflict, which amuses the audience but overshadows the main plot including Hero and Claudio. This shows they are matched and would make a triumphant relationship. Hero and Claudio speak in poetic verse, which artificially and ideally underlines their sentiments. This indicates their love is superficial and is unlikely to succeed. However it is considered that Beatrice and Benedick are na�ve and immature because they are deceived into loving each other and mock each other constantly. ...read more.

According to critics Hero is na�ve as she is marrying Claudio without even knowing anything about him. Hero always does what her father would tell her to do 'I will do any modest office, my lord'. Claudio also does not know Hero, so is immature to say he loves her. In the Elizabethan period courtly society individuals were obsessed with self advancement often at the cost of other people. However, Hero does not know that Claudio is a jealous person whom likes to control his women; Beatrice describes him as having a 'jealous complexion'. Hero and Claudio will not succeed as they are happy to accept an arranged marriage, even though they believe they love one another 'I love her, I feel'. However, they both have the same ambition in life, which is to climb the social ladder even using their acquaintances if necessary. One viewpoint is that Claudio uses Hero to obtain his fortune, and that Hero is ambitious and acts like the dutiful daughter in order to get what she wants. Claudio acts with courtly suspicion at the ball as he pretends to be Benedick when asked by Don John. ...read more.