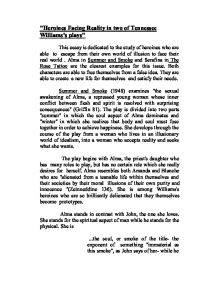 "Heroines Facing Reality in two of Tennessee Williams's plays" This essay is dedicated to the study of heroines who are able to escape from their own world of illusion to face their real world . Alma in Summer and Smoke and Serafina in The Rose Tattoo are the clearest examples for this issue. Both characters are able to free themselves from a false idea. They are able to create a new life for themselves and satisfy their needs. Summer and Smoke (1948) examines "the sexual awakening of Alma, a repressed young woman whose inner conflict between flesh and spirit is resolved with surprising consequences" (Griffin 81). The play is divided into two parts "summer" in which the soul aspect of Alma dominates and "winter" in which she realizes that body and soul must fuse together in order to achieve happiness. She develops through the course of the play from a woman who lives in an illusionary world of idealism, into a woman who accepts reality and seeks what she wants. The play begins with Alma, the priest's daughter who has many roles to play, but has no certain role which she really desires for herself. ...read more.

Now "the tables have turned " as she begins to think in the same way as John. Alma now rejects false love, as it has never achieved her dreams of marrying John. She faces the reality and begins a new stage in her life by confessing her love to John, who refuses it. The crisis that leads her to such a change is the feeling that her youth is slipping away. While John begins in flesh and ascends to the spirit, Alma begins in spirit and descends to flesh. In the tragic irony of Summer and Smoke these two characters need each other to be a whole, but instead each is transformed into the other, John sacrificing his capacity to reveal for Alma's earnstness, Alma sacrificing her belief in the soul for John's capacity to experience the passion of flesh.(Ross 131) She is now able to experience her full humanity after succeeding in facing reality. She moves from being a hysterical, prim priest's daughter to a woman who has sexual liberity. The play ends with a scene where Alma's sexual awakening, after too long period of supression, drives her into the arms of strangers. ...read more.

The sign came through the entrance of Alvaro, a truck driver, who is completely similar to Rosario. This leads her to have sex with him, imagining that he is her husband. She says to her daughter, "He was a Sicilian: he had rose oil in his hair and a the rose tattoo of your father. In the dark room I couldn't see his clown face. I closed my eyes and dreamed he was your father... "(Act three. Scene three) After Serafina realizes the reality of Rosario's unfaithfulness, she breaks the urn that includes his ashes and blows out the Madonna's light. She doesn't believe in the Madonna, who gives her a wrong sign,any more,"...I forgot you the way you forgot Serafina". She begins a new era in her life. She faces reality. She changes from "a wife whose life centers upon martial love to a ferocious yet dependent widow, to an emotionally charged expectant lover who again becomes pregnant" (Griffin 111). Finally, she is totally freed from her repressions and illusions through a new man who enters her life acquiring a rose tattoo in imitation of Rosario. Although he is dead now, Rosario pushes her to face reality and free herself from the memory of his assumed unfaithful love. ...read more.