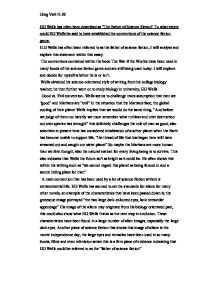 HG Wells has often been described as "The Father of Science Fiction" To what extent could HG Wells be said to have established the conventions of the science fiction genre. H.G Wells has often been referred to as the father of science fiction, I will analyse and explore this statement within this essay. The conventions contained within the book The War if the Worlds have been used in many books of the science fiction genre and are still being used today. I will explore and decide for myself whether he is or isn't. Wells obtained his science-orientated style of writing from his collage biology teacher; he then further went on to study biology in university, HG Wells Good vs. Evil convention- Wells seems to challenge mans assumption that men are "good" and Martians are "evil" In the situation that the Martians face; the global cooling of their planet Wells implies that we would do the same thing. "And before we judge of them too harshly we must remember what ruthless and utter destruction our own species has wrought" this definitely challenges the role of man as good, also scientists in present time has ...read more.

In the book when the Martians emerge and begin to kill, the human race seems to abandon social customs and decide to flee at any dispense, in the book it shows that many people where crushed under the feet of the crowd. Also in the absence of government the citizens revert to more primitive instincts and loot shops for food, also when the curate and the narrator are blockaded in together the narrator became territorial and became the dominant person, he constantly had to defend the resources from the curator "I planted myself between him and the food" this is a prime example that when resources are in short supply even the most respectable of people can, and will result to the most basic instincts. The aggression of the curate and his constant mental instability thickens the amount of the tension in the atmosphere "the threatened he would shout and bring the Martian's upon us" this type of tension has also been passed down in films as the chance of being discovered by the threat that is pursuing you if by far the most effective way of creating tension. ...read more.

However out of all these conventions that have passed down through other texts and media sources none can compare how realistic Wells made his books feel. By reading the texts it seemed that Wells's scientific background helped beyond measure as he understood the environment he lived in so well he was able to interpret what people would most likely do. This injection of real life themes and scenarios i.e. the global cooling of Mars, evolution, life on other planets really relates to the reader and enables him/her to engage with the text to a point were it gets you thinking this really could happen. These ideas are what make HG Wells the Father of Science Fiction, although they may have been altered along time, you can find many examples of this blue prints for "the science fiction plot" in many modern day science fiction films, although Wells is long gone the impact of his work will leave a influence in many more films and books to come. Ultimately HG Wells is the true Father of Science Fiction. ?? ?? ?? ?? Greg Vail-11.03 ...read more.