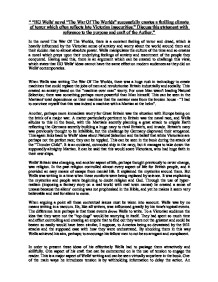 &quot; &quot;HG Wells' novel &quot;The War Of The Worlds&quot; successfully creates a thrilling climate of terror which often reflects late Victorian insecurities.&quot; Discuss this statement with reference to the purpose and craft of the Author.&quot;

" "HG Wells' novel "The War Of The Worlds" successfully creates a thrilling climate of terror which often reflects late Victorian insecurities." Discuss this statement with reference to the purpose and craft of the Author." In the novel The War Of The Worlds, there is a constant feeling of terror and dread, which is heavily influenced by the Victorian sense of anxiety and worry about the world around them and their sudden rise to almost absolute power. Wells manipulates the culture of the time and so creates a novel which preys upon their underlying feelings of anxiety and resentment of the people they conquered. Having said this, there is an argument which can be created to challenge this view, which states that HG Wells' ideas cannot have the same effect on modern audiences as they did on Wells' contemporaries. When Wells was writing The War Of The Worlds, there was a huge rush in technology to create machines that could replace the jobs of men and revolutionise Britain industrially and socially. This created an anxiety based on the "machine over man" worry. For once Man wasn't leading Natural Selection; there was something perhaps more powerful than Man himself. ...read more.

When arguing a point all these contextual issues must be taken into account. Wells was by no means writing in a vacuum. He, like all writers, was influenced greatly by his time's topical events. The difference here perhaps is that these events drove Wells to write. To a Victorian audience the idea that they were not the "top dogs" would be worrying in itself. They had spent so much time and effort controlling and creating an empire that to find out they were not the greatest and could be beaten so easily would have been similar, I suppose, to America being so devastated by the 9/11 attacks and the supposed ease with how they were orchestrated. By shocking them in this way Wells achieved his aim, perhaps; to encourage his fellow men to not be so arrogant and complacent. In order to present these ideas of his effectively Wells had to package them attractively and skillfully. One aspect of his craft that can be commented on is the use of tension to engage the reader. This is a major aspect of Wells' writing and can be seen virtually anywhere in the book. ...read more.

Although in the literal sense the reader is shocked by the man's death, in the metaphorical sense, to the pride white Victorian upper-class, imagery such as this scared them, because they thought they could not be hurt by creatures stupider than them. However, it can be said that in the modern setting, Wells' book is not frightening because most of the ideas he pioneered in his time have already been used so much in horror works over the years that nowadays they are commonplace. An example of this is the Heat-Ray; although the idea is frightening, lasers are somewhat clich�d today and the modern audience has seen the premise before. Another reason modern horror fans may not be scared by Wells' book is because of the execution and his descriptions. Wells' style is subtle, building tension and unease. Most popular horror is based around shocking the audience; they wouldn't want to wait around for the cylinder to unscrew, for example, and coming back to the heat-ray: if the victim just vanishes, people wouldn't be scared. If they were more verbosely described as being having third degree burns and being reduced to the bare bone, people would be more engaged. I think modern audiences are more impatient than Wells' contemporaries, and to a modern audience The War Of The Worlds isn't a frightening book, but more an interesting book. ...read more.