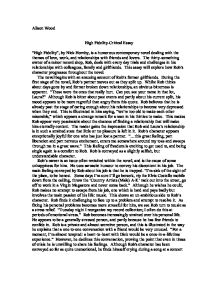 Alison Wood High Fidelity-Critical Essay "High Fidelity", by Nick Hornby, is a humorous contemporary novel dealing with the themes of love, work, and relationships with friends and lovers. The thirty-something owner of a minor record shop, Rob, deals with every day trials and challenges in his relationships with colleagues, family and girlfriends. This essay will explore how Rob's character progresses throughout the novel. The novel begins with an amusing account of Rob's former girlfriends. During the first stage of the novel, Rob's partner moves out as they split up. Whilst Rob thinks about days gone by and former broken down relationships, an obvious bitterness is apparent. "These were the ones that really hurt. Can you see your name in that lot, Laura?" Although Rob is bitter about past events and partly about his current split, his mood appears to be more regretful than angry from this quote. Rob believes that he is already past the stage of caring enough about his relationships to become very depressed when they end. This is illustrated in him saying, "we're too old to make each other miserable," which appears a strange remark for a man in his thirties to make. ...read more.

It takes the presence of someone new and attractive to make Rob realize how he misses Laura. Again, we are made aware of how Rob uses music to convey his feelings; as he is thinking of when he first met Laura and he made her a cassette. "I spent hours putting that cassette together. To me, making a tape is like writing a letter- there's a lot of erasing and rethinking and starting again, and I wanted it to be a good one." Through fantasizing about being with someone else, and reminiscing about the first acquaintance he had with Laura, Rob realizes now that he misses her, and he also misses how he felt in the initial stages of his relationship with her. Living without Laura stimulates Rob to think about what it was that caused them to separate, and what Laura will be going through with another partner. He becomes obsessed with contemplating Laura's new partner, and whether life with him and in particular, sex with him is superior to what she had with Rob. Rob becomes easily disheartened, and appears to be very paranoid about Laura's new partner. ...read more.

In the latter stages of the novel a change in Rob's character emerges as he and Laura are reunited as a couple. For Rob, this is more than being happy with a partner. It means he is more content in his job, feels uncompetitive, and has approval from his parents who hope he will settle down. The approval of his parents is something Rob is particularly happy with, and notices their positive feelings towards him while at their house, "There's a glow in the kitchen now, genuine three way affection, where previously there might have been simply mutual antagonism ending with my mum's tears and me slamming the door." "High Fideltiy" is an entertaining and amusing novel which portrayed the theme of love using humour, but managed to remain serious and at some points saddening. It used a clear moral, which was that the power of love should be believed in, as it can overcome other difficulties and ordeals that life involves. Rob's progression in character is perfect proof of this, as it drastically improves when he is reunited with his girlfriend. Rob begins as a saddened, bitter and selfish man, and being in love makes him more carefree and joyful. I thoroughly enjoyed reading "High Fidelity" and it's wit, realistic style and intriguing characters make it easy and likeable to read. ...read more.