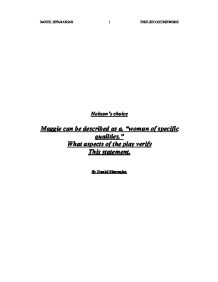 Hobson's choice - Maggie can be described as a &quot;woman of specific qualities.&quot; What aspects of the play verify this statement.

As Hobson protests Maggie defiantly stands her ground and "makes terms" with Hobson. Yet again, we have seen her domineering personality protrude to give her what she wants. From Hobson at the moment she wants, "You will pay my man, Will Mossop, the same as before." And then for her self, "and you will pay me fifteen shillings by the week." He tries to beat Will with his belt to stop the marriage, but Willie shows a new strength and stands up against Hobson and kisses Maggie. Maggie has now achieved the 'first part of her plan' and says, "Willie! I knew you had it in you, lad." When she says this it is like she never expected him to stand up like this, but when Willie does she is perceptive enough to praise him. Maggie approaches her wedding with a very no nonsense method, which we have seen displayed in the opening scenes. We see her hearing of her father's mishap, from Albert Prosser. But at this point Maggie is sorting out the wedding. She arranges for the ring. A normal woman of that period and even now would like to possess gold, or some other valuable material, for their ring. Maggie chooses and ordinary brass. This is because her sense of purpose outweighs any romantic notions that women may have seen about marriage. She sees the symbol of long term success and love. "A ring out of stock!" ...read more.

Eventually Will changes the name to "Mossop and Hobson", and tells Maggie that that is the name, and it is left alone. This is a remarkable change in the relationship. "Mossop and Hobson or its Oldfield road for us Maggie." At the very end see one last glimmer of dominant Maggie. Will says, "I'm afraid I bore on him to hard. Maggie dismisses his worrying thoughts and says, "Don't spoil it will. You're the man that I made and am proud of. We see Maggie filled with true love as she will not let Willie replace the symbolic meaning of the brass ring. The moment is captured and the Maggie has now achieved her goal. We can only be certain that Maggie and Will go on to bigger and better things all due to the abundant qualities possessed by Maggie. She has a strategical brain with the power to extract the smallest amount of potential. But overall Maggie is a unique woman of her day. "Hobson's Choice" emerged to the public around the time when women were treated as a lower form to chauvinistic men such as Hobson. Maggie therefore is a woman that can be used as an example of what a female can be. I believe that Harold Brighouse was a feminist and feel that by using Maggie and her qualities he has projected the view that women can be as strong as or stronger than men. Yet with the touch of femininity, she has shown a quality to see past the stereotypical classes, to see what people really are for there heart and aptitude. DANIEL SITARANJAN 1 ENGLISH COURSEWORK ...read more.

The essay has many strengths. The quotes selected are appropriate and support the points made. The student has a very thorough understanding of the events of the play. However, tracking through the play scene by scene leads to a rather narrative approach. The advice is to know in advance the points about attributes or personality, and make those the topic sentences, and use a range of evidence from different parts of the play to support them. The result is a much more concise and analytical essay.