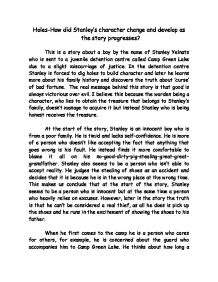 Holes - How did Stanley's character change and develop as the story progresses?

Holes-How did Stanley's character change and develop as the story progresses? This is a story about a boy by the name of Stanley Yelnats who is sent to a juvenile detention centre called Camp Green Lake due to a slight miscarriage of justice. In the detention centre Stanley is forced to dig holes to build character and later he learns more about his family history and discovers the truth about 'curse' of bad fortune. The real message behind this story is that good is always victorious over evil. I believe this because the warden being a character, who lies to obtain the treasure that belongs to Stanley's family, doesn't manage to acquire it but instead Stanley who is being honest receives the treasure. At the start of the story, Stanley is an innocent boy who is from a poor family. He is timid and lacks self-confidence. He is more of a person who doesn't like accepting the fact that anything that goes wrong is his fault. ...read more.

Stanley is a person who isn't considered trust worthy because when he says that he didn't steal the shoes in court, nobody believes him and he is sent to Camp Green Lake. Also, when he reaches this camp, he says that he stole the sneakers and yet nobody believes him. Some of the people believe that it is impossible for him to have stolen the shoes of "Sweet-Feet" (Clyde Livingston) this is proven when "Squid" says "No way". Stanley is a person who isn't very self-confident as he always finds fault with himself. For example, when he is in the camp digging holes he finds himself to be "defective" and he thinks to himself that "for once in his life" it pays to be "overweight" as it helps him push the blade of the shovel deeper into the earth. Nearing the middle of the story, Stanley's character seems to change when he learns more about the harsh reality of camp life. His character transforms from one that is simple to a harsher and stronger one. ...read more.

However, nearing the middle of the story he actually makes up his mind and decides to run away from Camp Green Lake and go in search of Zero. In my opinion, this is the time where he thinks for himself and makes a decision that he wants to look for Zero. At this period of time Stanley goes through some changes as he starts to care about Zero again. This adaptation is after his previous change due to the exposure of the harsh environment in Camp Green Lake. Stanley, at current has already changed his personality to what he was as he now started to care about others again. Stanley now seems to consider Zero as his friend this proven by his act of running away from green lake and searching for Zero. Stanley in the story was a very honest character but the "curse" on him seemed to affect his luck but everything turned the right way up when he took Zero up great thumb. This shows that the story about the curse was partially true. Stanley was a very complicated character and he always acted differently in different. ...read more.