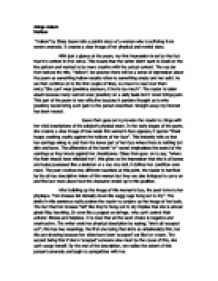 Hollow by Elissa Soave tells a painful story of a woman who is suffering from severe anorexia. It creates a clear image of her physical and mental state.

Aniqa Aslam Hollow "Hollow" by Elissa Soave tells a painful story of a woman who is suffering from severe anorexia. It creates a clear image of her physical and mental state. With just a glance at the poem, my first impression is set by the fact that it is written in free verse. This means that the writer didn't want to dwell on the line pattern and wanted to be more creative with the actual content. The reader then notices the title, "Hollow"; we assume there will be a sense of depression about the poem as something hollow usually refers to something empty and not solid. As we then continue on to the first couple of lines, we have to read over them twice."She can't wear jewellery anymore, it hurts too much". The reader is taken aback because many women wear jewellery on a daily basis but it never brings pain. This part of the poem is very effective because it ponders thought as to why jewellery would bring such pain to the person described. ...read more.

"Her dresses fall dismally down like soggy rags hung out to dry". The simile in this sentence really pushes the reader to conjure up the image of her body. The fact that her dresses "fall" like they're hung out to dry implies that she is almost ghost-like; haunting. Or even like a puppet on strings; who can't control their actions: lifeless and helpless. It is clear that all the word choice is negative and unattractive. The writer ends her physical description by saying; "she's all scooped out", this has two meanings, the first one being that she's so unbelievably thin, her ribs are showing because her sides have been 'scooped' out like ice-cream. The second being that if she is 'scooped' someone else must be the cause of this, she can't scoop herself. By the end of the description, we realise the extent of this person's anorexia and begin to sympathise with her. The next part of the poem proves frustrating for the reader because in just a few lines we have discovered how painfully and dangerously thin this woman is, yet she doesn't seem to realise it. ...read more.

The "stone" re-establishes the idea of something lifeless. "Another few pounds. A couple more inches. Closer. Close". The short sentences give us the impression that she is gasping for breath and getting closer to death. The reader feels as if she will never reach her target because she will die before she is ever satisfied. Soave ends the poem by saying, "Still it'll be worth it, to see his face". This is like a slap in the face because after all her immense suffering is revealed, we are told that she is doing this to get her husband back, its irony. The poem ends on a bitter note because the reader knows that she is most likely going to die before she sees his face. To conclude, Elissa Soave demonstrates a brilliant piece of imagery with this eye-opening poem which tugs at the heart strings. The reader discovers the tragic story of this young woman who is starving herself to death. Soave is very successful with her use of poetic techniques. Her alliteration, similes and word choice conjure up an ever-lasting; distinct image in the mind of the reader of this tortured soul. ...read more.