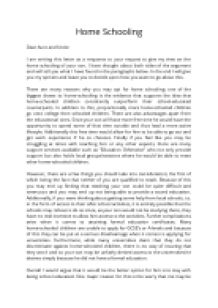 Transfer-Encoding: chunked ﻿Home Schooling Dear Aunt and Uncle I am writing this letter as a response to your request to give my view on the home schooling of your son. I have thought about both sides of the argument and will tell you what I have found in the paragraphs below. In the end I will give you my opinion and leave you to decide upon how you want to go about this. There are many reasons why you may opt for home schooling; one of the biggest draws to home-schooling is the evidence that supports the idea that home-schooled children consistently outperform their school-educated counterparts. In addition to this, proportionally more home-schooled children go onto college then schooled children. There are also advantages apart from the educational ones. ...read more.

Additionally, if you were thinking about getting some help from local schools, i.e. in the form of access to their after school activities, it is entirely possible that the schools may refuse to do so since, as your son would not be studying there, they have no real incentive to allow him access to the activities. Further complications arise when it comes to attaining formal education certificates. Many home-schooled children are unable to apply for GCSE?s or A-levels and because of this they can be put at a serious disadvantage when it comes to applying for universities. Furthermore, while many universities claim that they do not discriminate against home-schooled children, there is no way of insuring that they won't and so your son may be unfairly denied access to the universities he desires simply because he did not have a formal education. ...read more.

While it is possible for him to succeed through home schooling, it is just as likely that he may end up being worse off. If he is unable to take part in school activities, act responsibly with his free time, get formal education certificates he could end up being worse off than if he continued with formal education. Even if he is able to do all the things I just mentioned it is still possible for universities to reject him based purely off the fact that he was home-schooled. In my opinion it would be too much of a gamble to opt for home schooling and the safer and more reliable option would be to continue in formal education. However if you believe you would be able to provide a good education, manage how he spends his free time, ensure he can get into after school activities and socialise, then I would say that home-schooling would be option, after all it is your decision. ...read more.