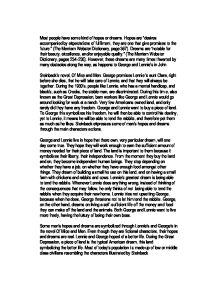 Most people have some kind of hopes or dreams. Hopes are "desires accompanied by expectations of fulfilment, they are one that give promises to the future." (The Merriam Webster Dictionary, page 367). Dreams are "notable for their beauty, excellence, and/or enjoyable quality." (The Merriam Webster Dictionary, pages 234-235). However, these dreams are many times thwarted by many obstacles along the way, as happens to George and Lennie's in John Steinback's novel, Of Mice and Men. George promises Lennie's aunt Clara, right before she dies, that he will take care of Lennie, and that they will always be together. During the 1930's, people like Lennie, who has a mental handicap, and black's, such as Crooks, the stable man, are discriminated. ...read more.

They hope they will work enough to earn the sufficient amount of money needed for their piece of land. The land is important to them because it symbolizes their liberty, their independence. From the moment they buy the land and on, they become independent human beings. They stop depending on whether they have a job, on whether they have enough food amongst other things. They dream of building a small house on this land, and on having a small farm with chickens and rabbits and cows. Lennie's greatest dream is being able to tend the rabbits. Whenever Lennie does anything wrong, instead of thinking of the consequences that may follow, he only thinks of not being able to tend the rabbits when they acquire their new home. ...read more.

Most of today's population is made up of low or middle class civilians resembling the characters illustrated by Steinback through Lennie and George. These people have hopes of someday leading a better life, dependent on only themselves. George and Lennie's dreams symbolize the step that every man wishes to take to a more enjoyable, independent life. George and Lennie's actions express their hopes and dreams through their actions in John Steinback's novel, Of Mice and Men. Their dream comes to an end when Lennie, trying to feel Curly's wife's hair, accidentally breaks her neck, killing her instantly. People today have similar ambitions. Every man wants to be independent. Every man wants to be his or her own boss. Very often, there are obstacles in the way of each person's dream, preventing him or her from accomplishing it. ...read more.

Some good points begin to be developed here but they are never fully developed which limits the impact of the response.