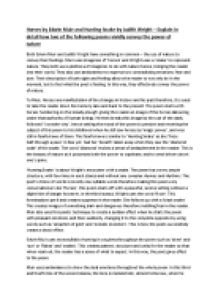 ﻿Horses by Edwin Muir and Hunting Snake by Judith Wright ? Explain in detail how two of the following poems vividly convey the power of nature Both Edwin Muir and Judith Wright have something in common ? the use of nature to convey their feelings. Muir uses imageries of ?horses? and Wright uses a ?snake? to represent nature. They both use a plethora of imageries to do with nature hence, bringing the reader into their world. They also use ambivalence to express two contradicting emotions: fear and awe. Their description of both sight and feeling allows the reader to not only be in the moment, but to feel what the poet is feeling. In this way, they effectively convey the power of nature. To Muir, Horses are manifestation of the changes in history and his past therefore, it is used to take the reader down his memory lane and back to the present. The poem starts with horses ?lumbering on the steady plough? giving the reader an image of the horses labouring, under that authority of human beings. ...read more.

This is how the poets successfully create a shock effect. Edwin Muir uses monosyllabic rhyming in couplets throughout the poem such as ?done? and ?sun? or ?flakes? and ?snakes?. This creates pattern, structure and unity for the reader so that when read out, the reader has a sense of what to expect. In this way, the poet gives effect to the poem. Muir uses ambivalence to show the dual emotions throughout the whole poem. In this third and fourth line of the second stanza, the tone is melancholic, almost torturous, when he uses the simile ?pistons? to describe the hooves of the horses ?in an ancient mill?. Muir compares the hooves of the horses? to an object: overworked and dominated over. This evokes a sense of pity in the reader. However, in the third stanza, he suddenly speaks of them differently. He now depicts the horses as ?conquering? and possessing the power to turn ?the field to brown?, in other words destroying nature. ...read more.

Muir says that he ?must pine? for his childhood when he was still in awe of horses and before the natural environment was tainted by all the whims of men. The poet reluctantly lets go and moves on. In ?Hunting Snake?, the snake captivates Wright. Wright describes the snake as a ?cold, dark and splendid? creature. All these words are in opposition to each other hence, showing us the fearful- awe experienced by the poet. The word ?dark? connotes a mystery which leads to the spark of curiosity Wright might have felt to perhaps, follow the snake. However, that would put her in peril; thus, she ?took a deeper breathe of the day? and moves on. This is the dual meanings of both the poems ? what one wants is different from the reality and, that cannot be changed. The only solution to this is to move on, which is exactly what both poets did. In this way, both Judith Wright and Edwin Muir vividly conveys the power of nature and uses it to express their emotions. By: Emily Chen (Year 11) ...read more.