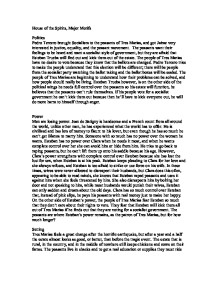 House of the Spirits, Major Motifs

House of the Spirits, Major Motifs Politics Pedro Tercero brought Socialism to the peasants of Tres Marias, and got Jaime very interested in justice, equality, and the peasant movement. The peasants want their feelings to be heard and want a socialist style of government, but they are afraid that Esteban Trueba will find out and kick them out of the estate. The people of Tres Marias have no desire to vote because they know that the ballots are changed. Pedro Tercero tries to make the people understand that this election will be different; there will be people from the socialist party watching the ballot taking and the ballot boxes will be sealed. The people of Tres Marias are beginning to understand how their problems can be solved, and how people should really be living. Esteban Trueba however, is on the other side of the political wings he needs full control over the peasants so his estate will function, he believes that the peasants can't rule themselves. If his people vote for a socialist government he can't kick them out because then he'll have to kick everyone out, he will do more harm to himself through anger. Power Men are losing power. ...read more.

From the beginning he is begging for Clara, and by the end he has lost Clara and has taken his anger out on Pedro Tercero. He hates Tres Marias because he has to be with people not of his class, " Everything Will change when we return to the city and start living like civilized people again." (200) Magic Realism After the earthquake it seems as if all the magic used in the book has dissipated. There are small traces of magic when Clara knows that Esteban used to rape peasant girls and Esteban never told her, but it is not stated that she read his mind maybe someone who saw Esteban taking girls away, told Clara. The only other trace of magic realism is when Esteban believes that he is shrinking even though he is not. The magic may be where his clothes are becoming looser or longer, but he justifies that with his loss of weight from eating healthy. The reason for the magic realism ending after the earthquake was a way to give a drastic end to magic with an event that was perceived as magic before, but now science shows that earthquakes occur because of the elastic rebound theory. ...read more.

He confused Blanca's interest in Jean de Satigny's class and culture as an interest in Jean de Satigny himself. Esteban also can't understand the most important thing to Blanca, her love for Pedro Tercero. He doesn't understand how she can fall in love with someone of a lower class, but Esteban doesn't understand the unexplainable attraction of love and sees it as bondage of two people from the same class. The love between Blanca and Pedro Tercero is the strongest love in the whole book. The devotion of the two to stay together through all the years is something close to magic. Starting out from playing in mud and sleeping naked under the dinner table on top of each other like two fitting puzzle pieces, perfect. Then through the years getting more and more serious until their love cannot be separated by Esteban's skeptical morals. They start to sneak out at night to meet by the river where they embrace and make love ending in the same position from when they first met. The love between the two lovers is natural not between class, money, family, or looks, but between two people who found love and will never let anyone take it from them. ...read more.