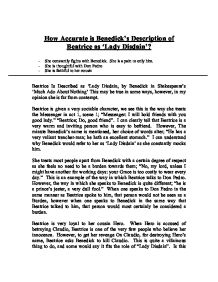 How Accurate is Benedick's Description of Beatrice as 'Lady Disdain'? - She constantly fights with Benedick. She is a pain to only him. - She is thoughtful with Don Pedro - She is faithful to her cousin Beatrice Is Described as 'Lady Disdain, by Benedick in Shakespeare's 'Much Ado About Nothing' This may be true in some ways, however, in my opinion she is far from contempt. ...read more.

I can understand why Benedick would refer to her as 'Lady Disdain' as she constantly mocks him. She treats most people apart from Benedick with a certain degree of respect as she feels no need to be a burden towards them; "No, my lord, unless I might have another for working days: your Grace is too costly to wear every day." This is an example of the way in which Beatrice talks to Don Pedro. ...read more.

Beatrice is very loyal to her cousin Hero. When Hero is accused of betraying Claudio, Beatrice is one of the very few people who believe her innocence. However, to get her revenge On Claudio, for destroying Hero's name, Beatrice asks Benedick to kill Claudio. This is quite a villainous thing to do, and some would say it fits the role of "Lady Disdain". Is this Beatrice's true nature revealed? I think that she is merely showing simple human emotions here, but it could be considered as drastic measures. ...read more.