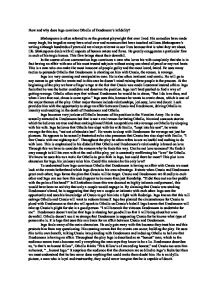 How and why does Iago convince Othello of Desdmona&amp;#146;s infidelity?

How and why does Iago convince Othello of Desdmona's infidelity? Shakespeare is often referred to as the greatest playwright that ever lived. His comedies have made many laugh, his tragedies many have cried over and romances that have touched millions. Shakespeare's writing although hundreds of years old are always relevant to our lives because that is what they are about, life. Shakespeare deals with all aspects of human nature and flaws. He greatly exaggerates a particular flaw in each of his tragic heroes. This flaw brings about their downfall. In the course of one conversation Iago convinces a man who loves his wife completely that she is in fact having an affair with one of his most trusted subjects without using one shred of proof or any real basis. This is a man who can make the most innocent of people guilty and the most loved, hated. He uses many tactics to persuade Othello that Desdemona is cheating on him with Cassio, the reason, is revenge. Iago is a very cunning and manipulative man. He is also often irrational and erratic. He will go to any means to get what he wants and in this case he doesn't mind ruining three people in the process. At the beginning of the play we hear of Iago's rage at the fact that Cassio was made lieutenant instead of him. Iago feels that he was the better candidate and deserves the position. Iago isn't hard pushed to find a way of getting revenge. Othello often says that without Desdemona he would be in chaos, "But I do love thee; and when I love thee not, chaos is come again." Iago uses this, because he wants to create chaos, which is one of the major themes of the play. Other major themes include relationships, jealousy, love and deceit. Luck provides him with the opportunity to stage an affair between Cassio and Desdemona, driving Othello to insanity and resulting in the death of Desdemona and Othello. ...read more.

So when Iago starts telling Othello of a relationship between Cassio and his wife, the rumours about Desdemona and the fact that she had refused men of higher status than Othello, "Not to affect many proposed matches of her own clime, complexion and degree..." he believes it may be true. Also he reminds Othello of what her father said when he first found out about Desdemona planning to marry Othello without his consent- "Look to her Moor, if thou hast eyes to see: She has deceived her father and may thee". To which Othello replies "My life upon her faith". Much of Othello deals with pride and reputation, for Othello now to hear about Desdemona's unfaithfulness, after he replied so convincingly that he trusts her completely, would certainly start to worry him. After all, if what Iago had been telling Othello was true, then Othello had been made to look a complete fool by Desdemona in a very short period of time. Iago often uses very crude language and often refers to animal imagery. He belittles Othello and Desdemona's relationship, regarding it in its most instinctive form, a sexual relationship, "...you'll have your daughter covered with a Barbary horse;" Othello however approaches it as serious and loving relationship, "... Nor to comply with heat the young affects in me defunct and proper satisfaction; But to be free and bounteous to her mind." That is why the audience is particularly amazed that Othello resorts to animalistic images too. Othello refers to Desdemona as "haggard", a hawk that cannot be tamed. He also refers to himself as a "toad"; this is a far cry from the man who stood in front of the Duke and other important men of Venice declaring his love. Shakespeare uses this technique to show us that Othello has lost his confidence and is no longer self-assured. As he becomes more and more angry his control through his speech begins to slip, no longer does he speak in long flowing sentences but now in exclamations, which hints at his loss of capability to loose his temper. ...read more.

Othello's jealousy is now at peak level, he still can't show rational thought and is blind about the true horror he is about to do. Even when he speaks to her and she denies ever giving Cassio the handkerchief he doesn't believe her, "Yes, presently; therefore confess thee freely of thy sin; for to deny each article with oath cannot remove nor choke the strong conception that I do groan withal. Thou art to die." It is ironic that Othello believes every lie that Iago fed him and yet cannot believe a single truth that the woman he loves tells him. "I never did offend you in my life; never lov'd Cassio but with such general warranty of heaven as I might love; I never gave him token." After killing his bride he is brought out of his trance and realises the mistakes he has made. Iago's scheme is brought out into the open. Emilia brings out the scheme when the truth is told about the true goings on. At this point in the play Othello's heroic qualities are put on show for the audience once more. "Speak of me as I am; nothing extenuate, nor set down aught in malice: then, must you speak of one that lov'd not wisely but too well; of one not easily jealous, but, being wrought, perplex'd in the extreme." Having realised the horror of the situation he takes full blame for his actions and commits suicide and lies next to his beloved bride to die. Iago is a man who is out for his own gain, and there are many people in our society who are like him. He is a character who knows how to direct circumstances to his own purpose, unfortunately the other character do not see this and are spun into his web of lies. By luck and tactics like planting ideas and evidence he is able to persuade Othello into thinking that Desdemona is having an affair and get his revenge. Through this catharsis we realise that in Iago Shakespeare has created that ultimate embodiment of evil and malice. ...read more.