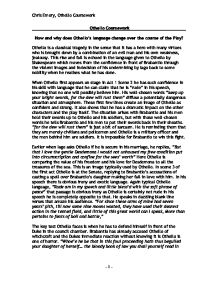 How and why does Othello's language change over the course of the Play?

Othello Coursework How and why does Othello's language change over the course of the Play? Othello is a classical tragedy in the sense that it has a hero with many virtues who is brought down by a combination of an evil man and his own weakness, jealousy. This rise and fall is echoed in the language given to Othello by Shakespeare which moves from the confidence in front of Brabantio through the violent images and indecision of his undermining by Iago back to some nobility when he realises what he has done. When Othello first appears on stage in Act 1 Scene 2 he has such confidence in his skill with language that he can claim that he is "rude" in his speech, knowing that no one will possibly believe him. His well-chosen words "keep up your bright swords, for the dew will rust them" diffuse a potentially dangerous situation and atmosphere. These first few lines create an image of Othello as confident and strong. It also shows that he has a dramatic impact on the other characters and the play itself. The situation arises with Brabantio and his men hold their swords up to Othello and his soldiers, but with those well-chosen words he tells Brabantio and his men to put their swords back in their sheaths. "for the dew will rust them" is just a bit of sarcasm. He is reminding them that they are merely civilians and policemen and Othello is a military officer and the men behind him are soldiers. It is impossible for Brabantio to win this fight. Earlier when Iago asks Othello if he is secure in his marriage, he replies, "But that I love the gentle Desdemona I would not unhoused my free condition put into circumscription and confine for the sees' worth" Here Othello is comparing the value of his freedom and his love for Desdemona to all the treasures of the sea. ...read more.

Just before the end Iago and Othello kneel down together and Iago solemnly swears to provide evidence of Desdemona's wrong doing to Othello. His real state of mind though is shown with the last four lines "Damn her, lewd minx! O, damn her! Damn her! Come, go with me apart; I will withdraw, to furnish me with some swift means of death for the fair devil. Now art thou lieutenant." Even in describing Desdemona as a 'Fair Devil' Othello uses an oxymoron to show his confusion. Act 4 opens with Othello and Iago discussing the proof that has been obtained so far. It quickly becomes apparent that Othello's mental state has rapidly deteriorated. When Iago starts to introduce the idea that Cassio has been sleeping with Desdemona with the key word 'Lie', the conversation breaks down in confusion over whether Cassio has been 'lying' with Desdemona or if Shakespeare is really drawing attention to the fact that Iago is telling a 'Lie'. Othello's response is one of total confusion; he abandons the well-formed blank verse he has spoken in for almost incoherent prose. Before he falls into a trance he is reduced to a series of short exclamations, "Pish! Noses, ears, and lips. Is't possible? - confess? - Hand-kerchief? - O devil!" Cassio briefly re-enters and is told by Iago to come back after a short while. When Othello recovers from his fit Iago tells him to hide himself and listen to what Cassio has to say. Although Othello is at one level quite aggressive with Iago saying "Dost thou mock me?" and "Did he confess it?" It is Iago who is in charge of the situation and Othello is reduced to one or two line interruptions. Just before Cassio comes back in Iago makes it clear how he will use the situation to deceive Othello: "As he shall smile, Othello shall go mad; and his unbookish jealousy must construe poor Cassio's smiles, gestures, and light behaviours, quite in the wrong." ...read more.

Cold, cold, my girl! Even like thy chastity." This leads him on to an eloquent outburst against himself as he realises his role in the tragedy "O curs�d, cursed slave! Whip me ye devils from the possession of this heavenly sight!" As the surviving characters come on stage Othello turns his language of delivery against Iago himself when he says to Cassio "will you, I pray, demand that demi-devil why he hath thus ensnared my soul and body?" Iago refuses to say anything and Othello embarks on one final, glorious speech full of poetry and memorable images. He pictures himself as someone who has suffered because of his love for Desdemona "then must you speak of one that loved not wisely but too well" in explaining his murder of Desdemona he likens himself to quotes "the base Indian" who "threw a pearl away" He continues his startling use of imagery by picturing himself as grieving for Desdemona in a way that will heal the situation "of one whose subdued eyes, albeit unused to the melting mood, drop tears as fast as the Arabian trees their medicinable gum." Finally he recalls his role as a Christian hero slaying the wicked Turk and his final words combine the themes of death and his love for Desdemona "I kissed thee ere I killed thee: no way but this, killing myself, to die upon a kiss." In Othello more than any other tragedy Shakespeare uses the hero's language to parallel his rise and fall. At the beginning when accused of witchcraft by Brabantio, Othello is completely in control of the situation and his language reflects it. As Iago begins to poison his mind and the scene shifts from the battlefield to the bedroom his language breaks down and he is reduced to a series of exclamations of abuse. It is only at the very end when he knows what has to be done that he becomes calm again and his language regains all its beauty and poetry. Chris Emery, Othello Coursework - 1 - ...read more.