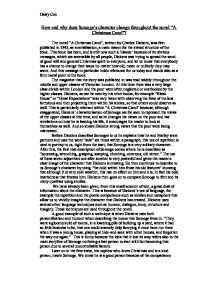 How and why does Scrooge's Character change throught the book &quot;A Christmas Carol&quot;?

How and why does Scrooge's character change throughout the novel "A Christmas Carol"? The novel "A Christmas Carol", written by Charles Dickens, was first published in 1843, as a serialisation, a main reason for the staved structure of the book. This book has been, and is still now such a 'classic' because of its obvious messages, which are accessible by all people, Dickens was trying to spread the word of good will and general Christmas spirit to everyone, and let us know that everybody has a chance to change their ways no matter how old, mean or unlikely they may seem. And this message in particular holds relevance for us today and stands also as a firm moral point to the book. The magazine that the story was published in was read widely throughout the middle and upper classes of Victorian London. At this time there was a very large class divide within London and the poor were often neglected or overlooked by the higher classes. Dickens, as can be seen by his other books, for example "Bleak House" or "Great Expectations" was very taken with observing the lives of the less fortuitous and then projecting them within his stories, so that others could observe as well. This is particularly relevant within "A Christmas Carol" because, although exaggerated, Dickens' characterisation of Scrooge can be seen to represent the views of the upper classes at this time, and as he changes his views on the poor and has revelations on how he is leading his life, it encourages the reader to look at themselves as well. ...read more.

This is because it is obviously a moral message that being selfish will make you a bad person. Imagery is also used at the end of Stave 3, Scrooge sees under the robe of the Ghost of Christmas Present. There are two children, whose names show that they are to symbolise Ignorance and Want. Dickens sees that a lack of education combined with poverty makes it impossible for anyone to have a good life. Afterwards, the Ghost tells Scrooge to beware the boy "most of all" because ignorance allows poverty to continue. This is a main message within the book as it shows blatantly the vicious circle in which the poor are trapped within, which can only be relieved by the rich gaining knowledge and losing ignorance. In the second stave Scrooge meets with The Ghost Of Christmas Past. The ghost has come to show him what Christmas used to be like for him and how he did in fact, enjoy it. He is shown a Christmas party at his place of apprenticeship. His employer Fezziwig has invited all employees to dance and eat and make merry. The Spirit senses Scrooge feels bad about something. "'What is the matter?' asked the Ghost. 'Nothing particular,' said Scrooge. 'Something, I think?' the Ghost insisted. 'No,' said Scrooge, 'No. I should just like to be able to say a word or two to my clerk just now. That's all.'" This shows again that although he may not be perhaps consciously changing or physically changing Dickens allows his characters moral and sensitive side to show through giving us the impression that Scrooge is becoming more empathetic and less selfish. ...read more.

This has deliberately been done by Dickens as it shows that a character whom at the start of the story you despised, by the end of this stave you feel sorry for and hope that he does have a chance to show that he is a changed man. Finally in the fifth stave Scrooge gets a chance to show how changed he is as he has been with the spirits only the length of one night. He gets to go and visit his nephew and he raises the salary of his clerk. This particular part, when he raises the pay of his clerk, uses humour again as it shows just how surprised Bob Cratchit is that he is receiving a pay rise, as he cowers and holds up a poker. This use of humour raises the mood of the last stave. Also we see Scrooge's mannerisms become much different and he laughs and becomes a different person. During the last stave the most important running theme is emphasised, that anyone can change for the better. This point is shown very clearly because Dickens creates the most horrible character he can and by the end of the book, as a reader you are inclined to like him. The book is appealing to readers because the moral points are important and it is a very heart-warming book that makes people feel better about themselves and want to embrace the spirit of Christmas, which is what Dickens intended. Daisy Cox ...read more.