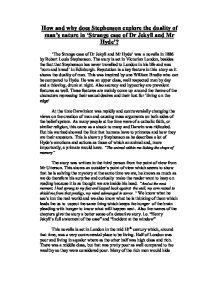 How and why does Stephenson explore the duality of man(TM)s nature in Strange case of Dr Jekyll and Mr Hyde(TM)?

How and why does Stephenson explore the duality of man's nature in 'Strange case of Dr Jekyll and Mr Hyde'? 'The Strange case of Dr Jekyll and Mr Hyde' was a novella in 1886 by Robert Louis Stephenson. The story is set in Victorian London, besides the fact that Stephenson has never travelled to London in his life and was 'born and bread' in Edinburgh. Reputation is a key feature in this story as it shows the duality of man. This was inspired by one William Brodie who can be compared to Hyde. He was an upper class, well respected man by day and a thieving, drunk at night. Also secrecy and hypocrisy are prevalent features as well. These features are mainly come up around the theme of the characters repressing their sexual desires and their lust for 'living on the edge' At the time Darwinism was rapidly and controversially changing the views on the creation of man and causing mass arguments on both sides of the belief system. As many people at the time were of a catholic faith, or similar religion, this came as a shock to many and Darwin was ridiculed. But his worked showed the link that humans have to primates and how they are their ancestors. ...read more.

Also, however, on the strolls described by Utterson, the scene portrayed is one set in a daytime setting, which makes a large difference to what we see when Hyde is in action. This shows that when ever it is the characters with a high class reputation then the setting seems to be a lot more 'delightful', as in the sun is shining, clean streets etc. On the other hand when a character with a more inadmissible reputation is in the scene, the setting is more at night in a dark, foggy, dingy little backstreet where those with a murderous demeanour can prey on their victims. In this novella, there are major setting factors which show the real life boundaries which occur in real cities with different classes and cultures. At the time this was written, many cities had large boundaries; the one that would have been most obvious to Stevenson would be the two sides of Edinburgh, where he grew up and wrote the story. The side where the rich people lived with high class, posh reputations and then there is the lower class side which is dirty, dark and dingy. However in the book, the two places are Soho and Cavendish square, which are both in London. ...read more.

But also the word "hide" can also mean skin, which could be Stevenson subtly saying that the things that Hyde does are only skin deep. Or that Hyde is Jekyll in a different skin, being able to live out his desires. Jekyll also could be a reference to a jackal, which has a reference in language 'jackaling' as a way of speaking derogatively and judgingly to others, this links to Jekyll because as Jekyll would never condone the use of drugs, but then he is making a super drug/potion to release Hyde. Also Utterson is a character whose name can be deciphered, sounding like "Utter(ing)" As in the type of speech. This could be a reference to the way that he tells of Jekyll's will that he believed to be blackmail. In conclusion its seem that Robert Louis Stephenson compares the duality of man to that of good and evil. He shows however nice and perfect one can seem, they have a much darker side to them and that Dr Jekyll was merely grasping at his and getting to "walk on the wild side" so to speak. Describing the heartlessness of Hyde he uses the characteristics of animals, mainly the primate, to show how brutal and careless he is. This shows the brilliance of Robert Louis Stephenson and the creativity that may have destroyed him like Mr Jekyll. ?? ?? ?? ?? ...read more.

The Response to Question is fairly focused, but there are time in it when the candidate only appears to be analysing as much as they can about whatever they appear to have remembered from classroom learning; there are moments where ...

The Response to Question is fairly focused, but there are time in it when the candidate only appears to be analysing as much as they can about whatever they appear to have remembered from classroom learning; there are moments where points are made and not explained; or where there is explanation, there is not sufficient evidence provided to successfully justify the analysis made. Another issue with the answer is that there are few moments where the candidate explicitly relates their analysis back to the question proposed. This is an imperative for cohesive, coherent answers that score highly, as it shows structure and planning and a full focus on the question.

The Level of Analysis is fair, and where the novella is analysed, the analysis shows abilities of a person operating at a high B grade for GCSE. However, there are fewer than sufficient moments on analysis that actually equates to what the question is asking: the presentation of the duality of Man in 'The Strange Case of Dr. Jekyll and Mr. Hyde'. It is absolutely crucial candidates adhere to the question and do not simply stray off and make analytical points that pertain to other aspects of the novel as this will not be demonstrating a focus on the question and elicits fewer marks than what the candidate could be capable of.
Where the candidate succeeds in in their contextual awareness. There is a sound appreciation of the social and historical factors that influenced the writing of the novel regarding Stevenson's reasons for writing as well as the inspiration of the events in the novel. I also like the expansion of the theme of duality into the place and setting, with the candidate commenting on the class divide of Victorian London being an example of the duality that influenced the novel and acts as evidence that everyone and everything can have a dark side.

The Quality of Written Communication is fair, but it is y no means perfect. There is a sound enough handling of the English language and few spelling errors are made in the answers, but sometimes their is a misuse/misunderstanding of the standards of grammar that lead to a miscomprehended sentence of two. Also, all candidate should avoid colloquialisms in their answers such as "posh", which is used on more than one occasion. As it is a slag word, though not known by many to be such, it can slide in practise papers but for real exams and coursework this is not acceptable.