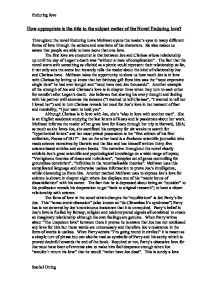 How appropriate is the title to the subject matter ofthe Novel Enduring love?

How appropriate is the title to the subject matter of the Novel Enduring love? Throughout the novel Enduring Love McEwan opens the reader's eyes to many different forms of love through the actions and emotions of his characters. He also makes us aware that people are able to have more than one love. The first love we encounter is that between Joe and Clarissa whose relationship up until the day of Logan's death was "without a trace of complication". The fact that the novel starts with something as clich�d as a picnic could represent their relationship so far, it not only sets the scene but instantly tells the reader about the kind of relationship Joe and Clarissa have. McEwan takes the opportunity to show us how much Joe is in love with Clarissa by letting us know that her birthday gift from him was the "most expensive single item" he had ever bought and "must have cost Joe thousands". Another example of the strength of Joe and Clarissa's love is in chapter three when they turn to each other for comfort after Logan's death. ...read more.

This "homo-erotic obsession" (also known as "de Cl�rambault's syndrome") Parry has is not deterred by Joe's continuous insistence that it is unrequited. Parry's belief in Joe's love is fuelled by fantasy, religion and misinterpreted signals all combined to create an imaginary relationship although his own feelings are genuine. When Parry writes about "The unspoken love" between them it proves he is aware that Joe has not confessed any love for him but those words are unnecessary and therefore Joe's resistance in the form of words is useless. When Parry admits "I'm going round in circles!" it is meant as a simple turn of phrase but can also be read as symbolic of Parry and his sanity which is proved doubtful towards the end of the book. Requited or not, Parry's obsessive love for Joe must have been of extreme size to make him feel desperate enough when Joe "wouldn't return his love" that he would "rather have Joe dead". This is surely a love which is out of control. By attempting suicide as a form of apology to the object of his love, Parry exposes the insanity his love has caused. ...read more.

The last form of love is of the 'forbidden fruit' variety shared between James Reid, Euler Professor of Logic and his student, Bonnie Deedes and between Clarissa's brother Luke and the actress he is moving in with. The difference between the two couples being that although the Professor and his student "are in love", they would rather have "kept it secret" unlike Luke who is "leaving his kindly beautiful wife and bonny twin daughters" to live with the actress, presumably causing pain and chaos for his family. With an age gap of thirty years and the original relationship being student-teacher, Bonnie and Professor Reid's love is unconventional to say the least. Both the Professor and Luke are throwing away their successful professional lives for the love of women. The meaning of the title Enduring Love could mean a love that has to be endured or one that can endure. By the end of the novel Joe and Clarissa's love endured and for Joe, Parry's love had to be endured. The title's significance is that it is neither one nor the other; it is both as it is relevant to each form of love explored in the novel. Enduring love Rachel Utting ...read more.