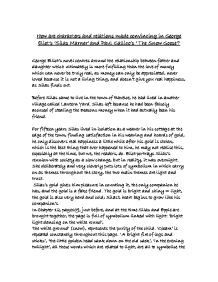 How are characters and relations made convincing in George Eliot's 'Silas Marner' and Paul Gallico's ' The Snow Goose'? George Elliot's novel centres around the relationship between father and daughter which ultimately is more fulfilling than the love of money which can never be truly real, as money can only be appreciated, never loved because it is not a living thing, and doesn't give you real happiness, as Silas finds out. Before Silas came to live in the town of Raveloe, he had lived in another village called Lantern Yard. Silas left because he had been falsely accused of stealing the Deacons money when it had actually been his friend. For fifteen years Silas lived in isolation as a weaver in his cottage at the edge of the town, finding satisfaction in his weaving ...read more.

In Chapter 12, page109, just before, and at the time Silas and Eppie are brought together, the page is full of symbolism linked with light: 'bright light dancing on the white round', 'the white ground' (snow), represents the purity of the child. 'Gleam' is repeated constantly throughout this page. ' A bright fire of logs and sticks', 'the little golden head sank down on the old sack', 'In the evening twilight', all these words which are related to light, are all to symbolise the goodness, and beauty of Eppie, and happiness which that new years eve brought to many, as well as Silas. If luck had not chanced upon the child and Silas', then Eppie would probably no longer be alive, Godfrey Cass would have been rejected from his family and his class, Silas would ...read more.

However, Dunsey takes advantage of Silas's trust. When Sails reports the missing gold, he doesn't want anyone to be punished, all he wants is his money returned. His confidence in people makes him believe that people ill return his money, because it is the correct thing to do. The villagers believe Silas's statement, and I think this shows him that people are capable of trusting. Godfrey trusts Silas to look after his child, though he doesn't have much choice, he feels comfortable with leaving the girl in Sials's care. Moreover, most importantly Silas believes that Eppie' Love has made him accept the power of trust and friendship again. And now that Eppie has promised to stay with Silas, he knows that he can trust religion and the world as he trusts her. He must have faith and trust that a God sent Eppie to him. ...read more.