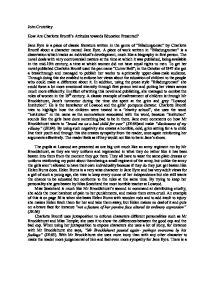 How Are Charlotte Bront(TM)s Attitudes towards Education Presented?

John Crutchley How Are Charlotte Bront�'s Attitudes towards Education Presented? Jane Eyre is a piece of classic literature written in the genre of "Bilsdungroman" by Charlotte Bront� about a character named Jane Eyre. A piece of work written in "Bilsdungroman" is a dissertation which tracks an individual's development, much like a biography in first person. The novel deals with very controversial matters at the time at which it was published, being available in the mid-19th century, a time at which women did not have equal rights to men. To get her novel published Charlotte Bront� used the pen name "Currer Bell"; in the October of 1847 she got a breakthrough and managed to publish her works to a primarily upper-class-male audience. Through doing this she enabled to enforce her views about the education of children to the people who could make a difference about it. In addition, using the prose style "Bilsdungroman" she could force a lot more emotional intensity through first person text and putting her views across much more efficiently. In effect of writing this novel and publishing, she managed to combat the roles of women in the 19th century. A classic example of maltreatment of children is through Mr Brocklehurst, Jane's tormentor during the time she spent at the grim and grey "Lowood Institution". ...read more.

"The elder lady was enveloped in a costly velvet shawl, trimmed with ermine and she wore a false front of French curls" (JE:67) Through using this irony of Mr Brocklehurst she directly juxtaposes Miss Temple, who is placed on a podium for all to see as the perfect teacher, this maybe a way in which Charlotte wanted to enforce her views on the reader as she is never ironic about Miss Temple but complimentary. She says she is in fashion with her clothing and hair, "was clustered in round curls, according to the fashion of the times" (JE:49) and "her dress, also in the mode of the day" (JE:49). In doing this she reinforces how good and brilliant she is against Mr Brocklehurst, like putting a small person at the feet of a really tall person. Unlike Mr Brocklehurst she sees the good in people like the part in the book when Jane drops her slate and it breaks Miss Temple says "Don't be afraid, Jane, I saw it was an accident; you shall not be punished"(JE:67). Miss Temple is described as leading by her example something you would never catch Mr Brocklehurst anywhere near, for example "and encouraging us, by precept and example" (JE:63) "March forward" (JE:63) ...read more.

Instantly creating sympathy for Jane, making her predicaments seemingly more painful. "wind rave in furious gusts, and the rain fell in torrents" (JE:47). Using pathetic fallacy makes the reader feel as if there is no way out of her problems and emotions and its all made seemingly worse by the weather its much like a gothic novel in composition and description. Charlotte Bront� uses very confusing language for a many people of today to understand but she had educated and formalise her language and description to make it look as if a man of the time had wrote it. She beautifully narrates through Jane adding her own opinions as Jane's reinforcing her views again and again into the readers head, making the school seem unbearable. Charlotte managed to force her arguments into the book and making men question what was happening in schools and changing it for the welfare of the children. I believe that Charlotte didn't believe that children were treated fairly and with respect in schools and weren't able to experience their full potential at school. She wanted to draw attention to this as she had experienced it first hand and wanted it to change it. The only way she could change it was to voice her affairs publicly to a largely upper-class-male-audience, the people who could change all of this and make schools a better place for all. ...read more.