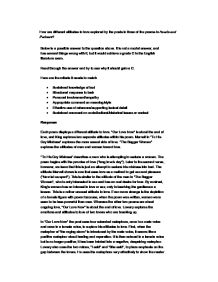 How are different attitudes to love explored by the poets in three of the poems in Hearts and Partners?

How are different attitudes to love explored by the poets in three of the poems in Hearts and Partners? Below is a possible answer to the question above. It is not a model answer, and has several things wrong with it, but it would achieve a grade C in the English literature exam. Read through the answer and try to see why it should gain a C. Here are the criteria it needs to match * Sustained knowledge of text * Structured response to task * Personal involvement/empathy * Appropriate comment on meaning/style * Effective use of reference/supporting textual detail * Sustained comment on social/cultural/historical issues or context Response Each poem displays a different attitude to love. "Our Love Now" is about the end of love, and King explores two separate attitudes within his poem. Marvell in "To His Coy Mistress" explores the more sexual side of love. "The Beggar Woman" explores the attitudes of men and women toward love. ...read more.

Lowery explores the emotions and attitudes to love of two lovers who are breaking up. In "Our Love Now" the poet uses four extended metaphors, once in a male voice and once in a female voice, to explore his attitudes to love. First, when the metaphor of "the raging storm" is introduced by the male voice, it seems like a positive metaphor about healing and reparation. It is then echoed in a female voice but is no longer positive; it has been twisted into a negative, despairing metaphor. Lowery also uses the two voices, "I said" and "She said", to place emphasis on the gap between the lovers. He uses the metaphors very effectively to show the reader clearly the differing attitudes of the lovers to love, emphasising the stark contrast between their feelings and the rift between them. Marvell also makes effective use of metaphor, using them to conjure up vivid images like "times winged chariot" to make the emotions and ideas he is communicating more real for the reader. ...read more.

"The Beggar Woman" uses a third-person narrator. This allows the poet to make comments on the action. The voice seems to favour the woman, perhaps an insight into the poet's true attitude to love, but is primarily there to tell the story. Marvell's poem, by contrast, is written in the first person. It seems to be a poem from a man to his mistress, a device that makes the audience feel personally involved and closer to the poet. However, it is interesting to note that the title is 'His' rather than 'My' Coy Mistress. This could be Marvell's way of trying to disown the poem and pretending it is not his life he is describing. Unlike both the other poems, "Our Love Now" uses two separate voices, "I said" and "She said". The second echoes the first but twists it, saying the opposite like a retaliation in an argument. This creates a sense of conflict and distance between the lovers, making their attitude toward love seem totally beyond repair. ...read more.