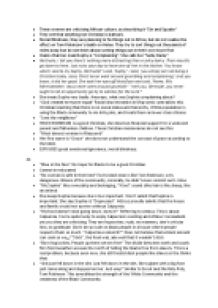 How are Prejudice and Hypocrisy explored in Harper Lee's To Kill a Mockingbird? Notes and Essay

﻿* These women are criticising African culture, as describing it ?Sin and Squalor? * They see that anything not Christian is barbaric. * Moral Blindness, they are planning to fix things out in Africa, but do not realise the effect on Tom Robinson?s death on Helen. They try to sort things out thousands of miles away but do not think about sorting things out in their own town first. * Claims that her maid Sophy is ?Complaining?. She calls her ?Sulky Darky?. * Gertrude, I tell you there's nothing more distracting than a sulky darky. Their mouths go down to here. Just ruins your day to have one of 'em in the kitchen. You know what I said to my Sophy, Gertrude? I said, 'Sophy,' I said, 'you simply are not being a Christian today. Jesus Christ never went around grumbling and complaining,' and you know, it did her good. She took her eyes off that floor and said, 'Nome, Miz Merriweather, Jesus never went around grumblin'.' I tell you, Gertrude, you never ought to let an opportunity go by to witness for the Lord." * She treats Sophy very badly. Anyways, what was Sophie complaining about? * ?God created everyone equal? Racial discrimination in Maycomb contradicts this. Christian teaching that there is no social status and hierarchy. White population is using the Black community to do dirty jobs, and treats them as lower class citizens. * ?Love thy neighbour? * HELEN ROBINSON is a good Christian, she deserves financial support for a widowed parent and fatherless children. These Christian missionaries do not see this. * ?Most devout woman in Maycomb? * Her first name is ?Grace? she does not understand the concept of grace according to the bible. * ESPOUSES great emotional ignorance, moral blindness. 24 * ?Blue in the face? No hope for Blacks to be a good Christian. * Cannot be educated. ...read more.

* ?To Maycomb, Tom?s death was typical. Typical for a nigger to cut and run. Typical of a nigger?s mentality to have no plan, no thought for the future, just run blind as fast as he saw.? This is a very racist comment. Deeply unfair and untrue. Stereotyping an entire race. Assuming that the black community is reckless. Ironically, Tom Robinson lived a clean and upright life, like a Mockingbird. Also, Tom Robinson had absolutely no choice, he was fighting for his life, he could not wait for an appeal, it was his best chance to break free. * Paragraph 6 * Dill in the courthouse ?It makes me sick? * Jem ?It ain?t right? * ?Mr Underwood didn?t talk about miscarriages of justice, he was writing so children would understand.? Mr Underwood writes to children so that the future generation would understand, there is no way to change the stubborn minds of the current generation, he gives more hope and faith in the young generation. * ?Tom?s death to the senseless slaughter of songbirds by hunters? He is trying the shame the whole community. People understand this, but don?t take them seriously. * ?Atticus had used every tool available to free men to save Tom Robinson, but in the secret courts of men?s hearts Atticus had no case. Tom was a dead man the minute Mayella Ewell opened her mouth and screamed.? Deep down inside them, they have already made a decision. It seems that there is justice, a court trial. Although Mr Underwood is racist, he still sees the injustice and shame of the community. * Link Deas walks Helen Robinson. In this novel, we see an upright, clean and respectable black man charged for a crime that he clearly didn?t commit, which epitomises how prejudice and hypocrisy is naturally adopted in human nature. Fortunately, as time progresses, we have seen and experienced many glimpses of hope for a world with less of these qualities, but we must admit the fact that ...read more.

Also, Tom Robinson?s death was of no apparent reason, but was harmed due to prejudice and strong racism. In this novel, we see an upright, clean and respectable black man charged for a crime that he clearly didn?t commit, which epitomises how prejudice and hypocrisy is naturally adopted in human nature. Fortunately, as time progresses, we have seen and experienced many glimpses of hope for a world with less of these qualities, but we must admit the fact that it will never be ceased, that we faced it right from the dawn of human history and would still face it till the end. Possible additions Cut out sentences The court case effect on Atticus. "Ruining the family" Francis ?Nigger lover? Cecil Jacobs "Your father's no better than the niggers and trash he works for!" Mrs Dubose. Atticus and his children have already received discrimination prior to the Tom Robinson court case, even worse, he also receives volleys of hideous insults from his own family. We can see that the community not only does not support Atticus defending a black man, but also despises him. Mr Underwood also adds ?Tom?s death to the senseless slaughter of songbirds by hunters? A senseless slaughter of songbirds suggest that Tom Robinson is a Mockingbird, who was innocent and was killed for no apparent reason, but died because of racism and injustice. He is trying the shame the whole community. People understand this, but don?t take them seriously. Also, Link Deas, the boss of now deceased Tom Robinson, makes a job for Helen Robinson. ?Mr. Link Deas made a job for Helen. He didn?t really need her, but he said he felt right bad about the way things turned out.? When Mr Link Deas ?Made? a job for Helen, this tells me that although he didn?t need her, he still felt sorry that Tom Robinson died wrongly and offered her a job so that she will be financially stable to raise her children and family. ...read more.