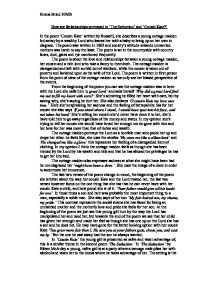 How are Relationships portrayed in 'The Seduction' and 'Cousin Kate?' In the poem 'Cousin Kate' written by Rossetti, she describes a young cottage maiden led astray

How are Relationships portrayed in 'The Seduction' and 'Cousin Kate?' In the poem 'Cousin Kate' written by Rossetti, she describes a young cottage maiden led astray by a wealthy Lord who leaves her with a baby to bring up on her own in disgrace. The poem was written in 1862 and society's attitude towards unmarried mothers was harsh to say the least. The poem is set in the countryside with country lanes, dust, gates and rye mentioned frequently. The poem is about the love and relationships between a young cottage maiden, her cousin and a rich lord who take a fancy to them both. The cottage maiden is disregarded and left with a child out of wedlock, while the cousin is taken out of poverty and lavished upon as the wife of the Lord. The poem is written in first person from the point of view of the cottage maiden so we only see her biased perspective of the events. From the beginning of the poem you can see the cottage maiden was in love with the Lord she calls him 'a great Lord' and asks herself 'Why did a great Lord find me out to fill my heart with care?' She's admitting he filled her heart with care, but by asking why, she's saying he hurt her. ...read more.

towards the end of the poem we see that her child has given her strength and made her feel as though she has one up on the Lord she has a son and he does not. He may have gone for the better looking option with her cousin Kate 'You grew more fair than I, He saw you at your fathers gate, chose you, and cast me by.' But the one he cast away had the son he always wanted. In 'Cousin Kate' the young girl is presented as na�ve and taken advantage of, this is a similar theme in the second poem 'The Seduction.' In 'The Seduction' by Eileen McAuley a young, na�ve girl is at a party where a teenage male plies her with alcohol and takes her to the docks where he takes advantage of her. The setting is the inner city docks were it is dirty and sleazy this is contrasting to the setting of 'Cousin Kate' which is a fresh, pure, country setting. The setting in my opinion mirror the feelings of the girls after they become pregnant the girl in 'Cousin Kate' sees her child as a gift something to be proud of 'My fair-haired son, my shame, my pride.' The girl in 'The Seduction' however sees her pregnancy as something to be ashamed of; she describes her pregnancy as 'a feminine void.' ...read more.

Women are victims or whores and men are seen as studs. One of the differences between the girl's situations is that the cottage maiden isn't influence by pier pressure or society; she genuinely falls in love with the Lord. The girl in 'The Seduction' however is extremely influenced by magazines and pier pressure, when he kissed her she was reminded of stories from 'teenage magazines.' Showing that the things we see today as luxuries that we can't live without like magazines and televisions probably do us more harm than good. They put into are heads that we should be doing the thing actors and the people on their shows are doing, and we shouldn't. Looking at these two similar but contrasting poems, I can see the way relationships in both are portrayed differently, both reflecting the times in which they were written. Both poems offer young, venerable girls as victims of the advances of the opposite sex. Showing how men to take advantage of them. These poems do show despite their similarities that life in general has changed over the past one hundred years and the way the girls were taken advantage of were completely different. One thing that hasn't changed though is the way society sees the girl at the end of it, despite the fact she was taken advantage off, plied with alcohol, lied to, made false promises to, she is still the whore. ?? ?? ?? ?? Emma Brind 10MB ...read more.